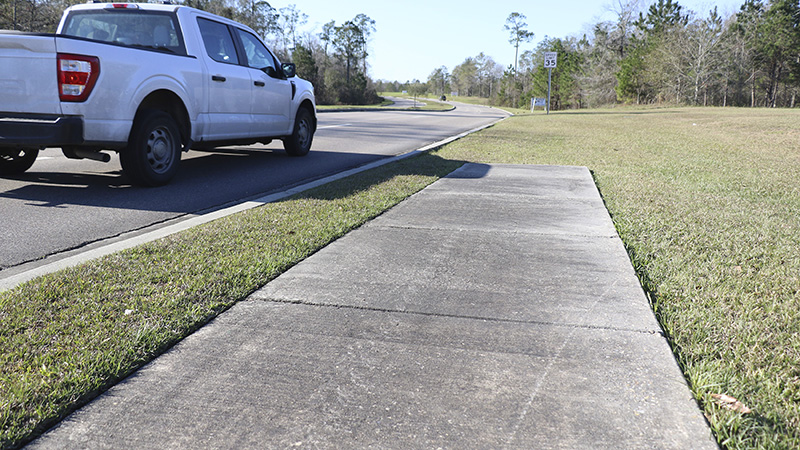 Sidewalk along Highland Parkway ends at this point, which is at the entrance of the Trinity United Methodist Church. Picayune’s City Council approved a bid this week to have the sidewalk completed to Highland Community Hospital. Photo by Jeremy Pittari

A motion to purchase property located at the intersection of Sixth Avenue  and South Magnolia Street was approved by the Council for a total cost of $63,000. Assistant City Manager Harvey Miller said the property was assessed at $66,000. Mayor Jim Luke said a use for that property by the city has not been decided yet.

A bid from J. Patrick Lee Construction LLC totaling $212,000 for the construction of restrooms at Friendship Park and two other parks was also approved. During discussion of the matter, Councilors Anna Turnage and Larry Brelend asked that projects to build restrooms at parks within their respective districts be considered in the near future.

Councilor Frank Ford asked what efforts will be taken to ensure those restrooms will not be vandalized. Parks and Recreation Director Trevor Adam said he is seeking bids for the installation of 10 cameras in key areas of the city to catch anyone in the act of vandalism.

Construction of sidewalks along Highland Parkway should begin soon now that the Council accepted a bid from John C. Lee Construction totaling $181,325. A portion of that road already has sidewalks, so this project will tie them together from the intersections of Sycamore Road to Highland Community Hospital.

A motion to apply for USDA Community Facility grant funds was also approved by the Council. Miller said the funds, if approved, could be used to purchase new equipment and vehicles for the Police and Fire Departments.

The Council also approved a motion to move $24,000 within the Police Department’s budget from the supply item line to the equipment line. City Clerk Sid Albritton said the adjustment is just a shifting of funds from one line item to another. Albritton said the move was made because the department has enough ammo, but wants to upgrade weapons.

A request to engage the accounting and consulting services of Baumann and Company PLLC, was also approved Tuesday.

After Councilor Anna Turnage asked why the city has to hire out to have the financial task completed, Albritton said the motion was required due to recent turnover in the City Clerk’s office. Due to that turnover, the former employee who handled annual payroll reporting is no longer employed with the city, and current staff are still in training to learn how to complete the task. Albritton said the expense would probably total “a few thousand dollars,” but could not provide an exact amount since he is unsure how long the process would take, but the deadline is at the end of this month. He added that the person who previously completed that work was a deputy clerk, not the former city clerk. Mayor Jim Luke said Albritton was appointed the new city clerk on Dec. 6.

According to previous coverage, the previous city clerk was Amber Hinton, who left the position back in October of last year.

At the end of Tuesday’s meeting, Luke invited the public to a ground breaking that will take place at the future site of a new Kids Kingdom in Friendship Park. That ground breaking will take place at 10 a.m. on Jan. 10. Luke said parts to construct the $660,000 playground, which Morris said will be the third largest in the state, have already begun to arrive. Luke expects the project to be complete in the next three to four months.

Transfer of ownership under a memorandum of understanding concerning a large generator from the Pearl River County Utility to the city of Picayune was also approved. Public Works Director Eric Morris said the transfer is not permanent, but is a long term agreement that states the city will assume the maintenance and care of the equipment while in the city’s possession. The generator will still belong to the PRCUA, and the agreement can be canceled at any time by either party.  The generator will be used to power equipment at two of the city’s water wells during power outages.

A motion was also approved to accept a bid from Hopkins Construction and Maintenance LLC., to conduct exterior renovation work on the historic side of City Hall. The $280,000 of funding needed to complete the work was provided by a federal grant, Morris said.