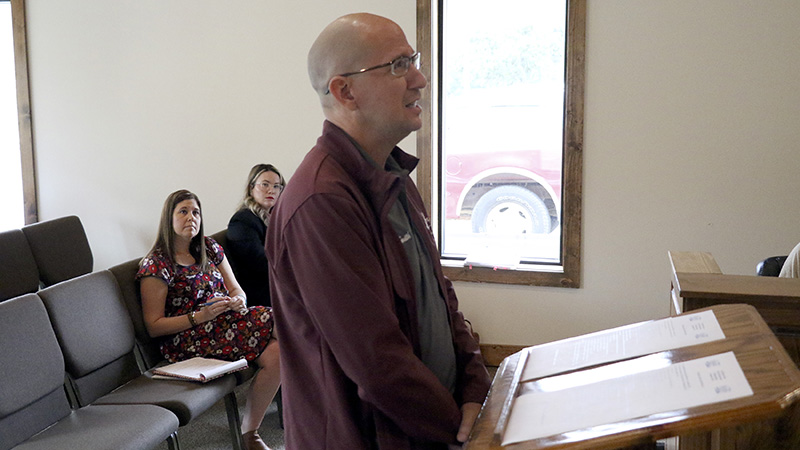 Pearl River County Extension Agent Dr. Eddie Smith was commended by the Board of Supervisors for going above and beyond to help those moving to the county from out of state to learn about various aspects of the area, such as growing plants in the local soil. Photo by Jeremy Pittari

Since the office of Mississippi State University’s local Extension Service was damaged during a fire this spring, the manager and staff of that office have been working out of temporary accommodations.

That led to Pearl River County Extension Agent III Dr. Eddie Smith bringing his annual report to the Board of Supervisors during Monday’s meeting. Smith said the report is typically held in his office, but due to the fire, he decided to give an amended version to the Board. During his brief update, he said the switch to providing online classes instead of face to face programs was successful during the pandemic, and that success will mean that even though face to face classes are returning, online classes will still be offered.

In the realm of 4H programs, Smith said that out of the state’s 21 programs, Pearl River County’s has the most participants.

Another success story is that his staff have been able to help people with their soil issues, especially newcomers who are unfamiliar with proper growing techniques best suited for Pearl River County soil types.

Part of that help, and assistance in other areas, have led to positive comments being shared concerning Smith and his staff helping people who were considering a move to this area from out of state. Board President Sandy Kane Smith commended Eddie Smith and his staff for providing that positive experience to those moving to the area.

As for how the project is coming along, Dungan said it appears the project will not be done by year’s end as previously expected. Part of that is due to the contractor, Huey Stockstill, not being able to resume work until the first of the coming year.

However county crews are still working to get their part of asphalt preparation work complete before then. Road Department Manager Charlie Schielder said he expects his crews to have their work done by year’s end, weather permitting.

A state aid road paving project is now complete, and Dungan said he expects the final inspection of Burnt Bridge Road and others included in the project to be done soon.

Work to repave Shorty Burgess is currently on hold due to the county’s inability to locate two of the five property owners involved where right of way is required. Dungan said three of those five property owners are on board, but attempts to locate the other two have been unsuccessful. He said he may need to resort to just knocking on the doors of the properties involved.