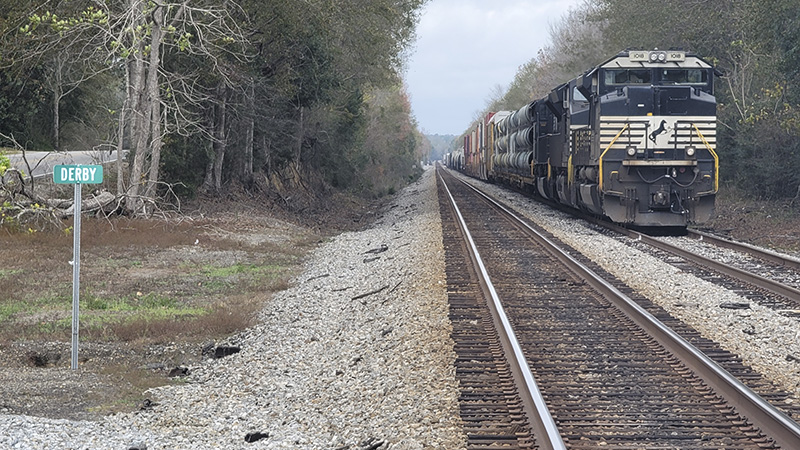 This train parked near the railroad crossing in the Derby community on Monday was previously stationed in such a way that it was blocking the crossing for days, causing concerns for emergency personnel response times.

That lack of an avenue to dispose of items that should not go to a landfill led to the Pearl River County Board of Supervisors discussing the need for a way to allow residents to properly dispose of those items all year long.

District III Supervisor Hudson Holliday said his concern is that when the hazardous waste days are held, typically funded by grants, they end quickly due to the money running out. When the collection of waste materials reaches a certain point, the county has to shut the collection down or incur the additional expense to dispose of those items. During the last couple of events, the county had to stop accepting items after only two hours. Holliday said his concern is how those items will eventually be disposed after they are turned away, especially after the resident put forth effort to load them and transport them to the collection point.

While a decision was not made during Monday’s meeting, County Administrator Adrain Lumpkin said the public may not be aware that some items deemed hazardous, such as old paint, can be made safer for disposal to the county landfill by letting it dry.

In other business, Tax Assessor Gary Beech informed the Board that he was notified by the state that a pipeline that runs through the county will be shuttered next year. That will result in a loss of about $880,000 in tax revenue. Beech said the closure is partially due to damage a Phillips 66 refinery sustained during Hurricane Ida.

Voters who live in areas affected by the county’s most recent redistricting effort will need to be aware that their voting precinct will also change. One precinct, Sycamore 5, will move to West Union Baptist Church soon. Circuit Clerk Nance Stokes said voters affected by the redistricting will receive a new voter registration card in the mail that will detail their new voting precincts and include information about the district in which they now live.

Stokes said most of the elections set for next year will be federal, but there will be school board elections for the Picayune and Pearl River County school districts.

“Any voter who will be affected will get a letter, and hopefully it will not get thrown away,” Stokes said.

Holliday also addressed a situation that occurred recently where a train blocked a crossing in the Derby area for days. In jest, Holliday said he considered having the sheriff impound the train.

The major concern with the crossing being blocked is that any emergency personnel responding to a call would be unaware the crossing was blocked until it was too late, resulting in lost response time.

The Board also discussed the need for an ordinance concerning the sale of liquor in the county. While Pearl River County is currently dry, Holliday said he expects to see that matter on the ballot soon.