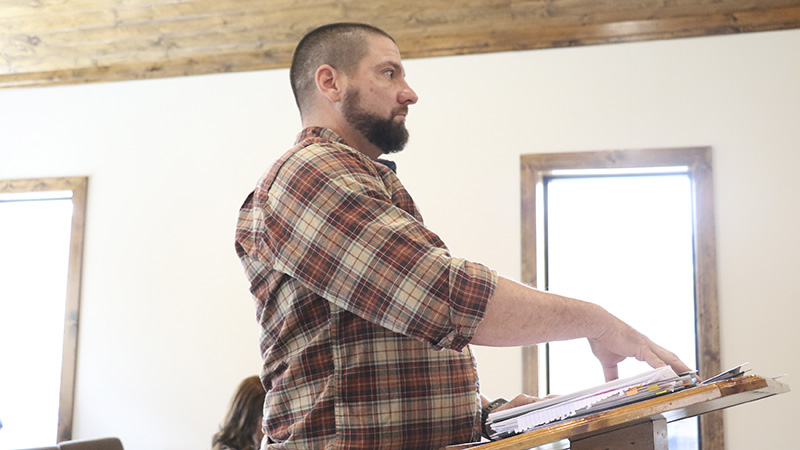 Mike Kennedy speaks to the Board of Supervisors about his ad valorem bill for his home during Monday’s meeting. Photo by Jeremy Pittari

During Monday’s meeting of the Pearl River County Board of Supervisors, a resident shared his distaste for not getting the benefits of homestead exemption.

Mike Kennedy said that his taxes for the home he and his family bought back in 2018 have been fluctuating. During one year, the total was $1,700, but the following year the total rose to $2,400.

Tax Assessor Gary Beech said his staff initially gave him one of the benefits of homestead exemption, lowering the assessment of the property involved to 10 percent instead of 15 percent, as a result the first year’s bill was $1,700. That was a partial discount however, forgoing the additional $300 credit homestead exemption provides and requiring the family to re-file. So when a representative of the Kennedy family came back to file again, staff noticed that the tag on the car was from Louisiana. Beech said it would have been unfair to give anyone homestead exemption if they have a vehicle with an out of state tag. According to various ordinances and tax laws, new residents of Pearl River County have a certain time period in which to get their vehicles registered in this county and their driver’s license changed to a Mississippi license. Otherwise they can’t qualify for homestead exemption until the following year, if those requirements are met.

Kennedy also said he was unaware how his property is assessed and at what value. Board attorney Joe Montgomery advised Kennedy that tax assessments are on display to the public in the Board’s meeting room and published in the local newspaper in August of each year. If an error is found or dispute needs to be filed, it is up to the homeowner to notify the tax office before the rolls are finalized.

Kennedy continued to ask for some kind of assistance from the Board, to which the Board decided to ask Montgomery to see if there was some kind of way to assist Kennedy.

In other business, the Board discussed a recent rise in expenses for public defenders in local courts.

District III Supervisor Hudson Holliday asked why private lawyers were brought in at an additional expense of $10,000.

Montgomery said that courts typically call in additional lawyers when the case load backs up or when a case involves several people where it may be a conflict of interest for one attorney to represent them all. Board President Sandy Kane Smith said he will ask Circuit Clerk Nance Stokes for a list of court cases for the Board’s review.