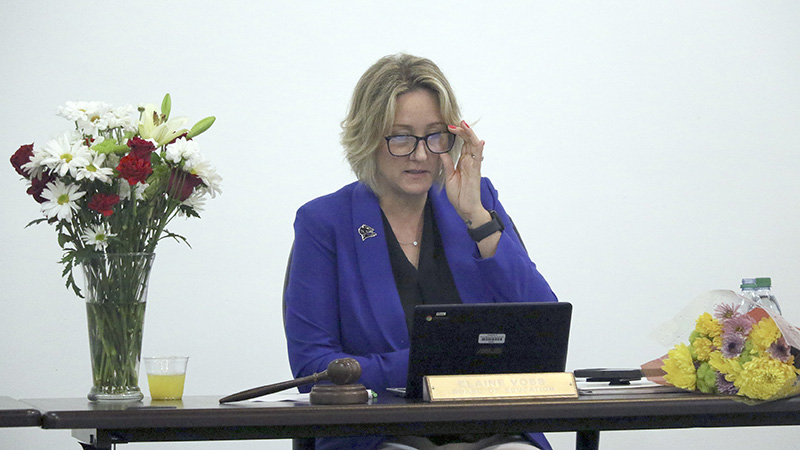 Pearl River County School District Board of Trustees President Elaine Voss attended her last meeting on Thursday. She will be replaced on the Board by Eli Ouder, who ran unopposed.

A parent of a Pearl River County School District student asked the Board of Trustees to consider changing  a policy that prevents a student from attending school if they have a fever above 100 degrees when the fever is caused by a vaccine.

Rebecca Knox addressed the Board to request that the current policy be changed, because her daughter almost had to miss several days of school due to her fever, which was caused by a recent dose of the COVID-19 vaccine.

Her daughter’s fever was caught by the school nurse when she saw the nurse for an unrelated reason.

Even though she had proof of recently receiving her second dose of the vaccine, Knox’s daughter was sent home.

Since her daughter is already struggling in school, Knox said she had to put extra effort into taking her daughter to a doctor to get a note stating she is cleared for school, which involved time and expense. Had she not secured the note, Knox said her daughter could have missed two and a half days of school.

While Knox said she is fortunate enough to be able to afford the time and money to get the doctor’s note, she is aware there are many families in the area who would be unable to cover those expenses.

No action was taken on her request by the Board.

In other business, district Finance Director T.J. Burleson gave the Board an update about the ongoing construction projects. He said that work on the new auditorium still involves exterior brick work, but some crews have begun work on the interior to install dry wall and the sprinkler system. He hopes the building will be complete by May so the senior awards ceremony can be held there.

In an effort to ensure his officers are ready, PRCC Police Chief Brandon Herrin said a tabletop exercise will be held with his staff, members of the Pearl River County Sheriff’s Department, EMTs with AAA Ambulance Service, firefighters with the Carriere Volunteer Fire Department, staff at the Pearl River County Emergency Operations Center and representatives with Homeland Security. The aim is to identify areas of strengths and weaknesses so they can respond to emergency situations more effectively. The exercise will be held on Dec. 14.

With a new Board member taking office next month, since current Board President Elaine Voss did not run for reelection, the Board chose new officers for a two-year term. Elected as president was Jerry Frazier, while Jeff Jones will take over the responsibility of vice president and Mark Herring will be the new secretary.

Next month, Voss will be replaced by Eli Ouder, who ran unopposed in that race earlier this year.

The Board later went into closed session to determine a need for executive session in relation to student and legal matters.