Discussing the mock scenario of an active shooter 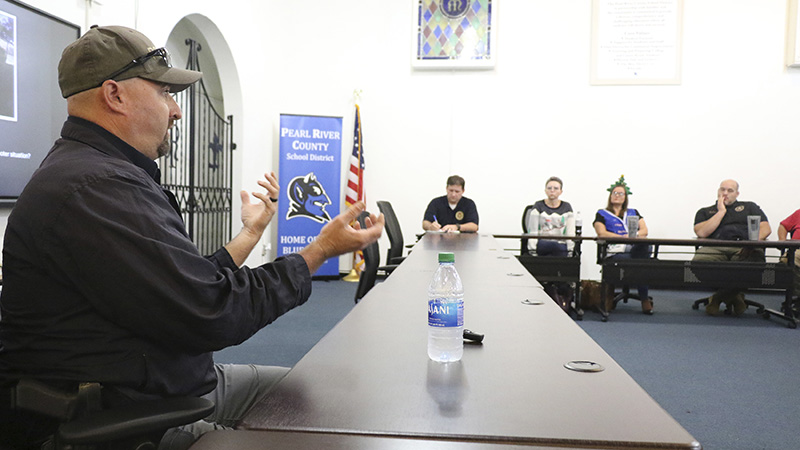 Pearl River School District Police Chief Brandon Herrin goes over a mock situation where an active shooter has entered a campus within the district and asks the attendees to share their thoughts on the best course of action during a recent tabletop exercise. Photo by Jeremy Pittari

With school shootings becoming all too common across the country, local emergency responders in the county and at the Pearl River County School District participated in a tabletop exercise to get a conversation going on the best methods to use should such a scenario play out locally.

As part of that exercise, PRC School District Police Chief Brandon Herrin presented those representatives with a mock scenario and asked them for input concerning several aspects of a subsequent response.

Some ways suggested to protect the most people included moving them to a safe area of what ever particular part of campus they might be when an active shooter strikes. If the violent act were to occur while students were having lunch, district Food Service Director Sheila Amacker suggested moving the children to the back of the building behind closed doors. That scenario would only work if the active shooter started the act in another part of the campus, since that would give the staff and children enough time to get to safety.

Shane Edgar with the Sheriff’s Department informed the group that the best method is to get everyone behind locked doors if at all possible. His suggestion was based on an analysis of previous active shooter situations across the country, where the shooter passed up classrooms that were locked to find people that may be out in the open.

To build on that situation, discussion was had as to when to declare the situation as safe to ensure any active shooter does not try to pose as a police officer, as was initially reported dafter the Oxford, Mich., incident in November of this year. Those reports claimed the the shooter tried to pose as a police officer to convince the teacher or students to open a closed door, but subsequent statements from the responding law enforcement agency dispute that claim.

Herrin said that is where communication between the teachers, administration and responding law enforcement would be key to ensure any person knocking at a door is not the shooter.

Other potential hurdles included what to do with the students after the situation has been quelled. With more than 3,000 students enrolled and more than 400 staff employed district wide, parents and other family members of those individuals would possibly try to go straight to the school to retrieve their children. Such a flock of vehicles would snarl traffic to the area and hinder response times. One suggestion included relocating the students via buses to a nearby church so parents could pick them up there. Since the situation may include high school students who have access to their own transportation, the number of children who need their parents to pick them up may be reduced if the scenario took place at that campus.

The availability of medical supplies to provide initial care to the wounded was also discussed.

First aid kits are stationed across each campus and many include tourniquets. Concern as to whether there would be enough ambulances was also discussed. EOC Director Danny Manely said previous emergency situations involving 8 to 10 injured people were effectively handled by EMS personnel, including the hayride incident in October of last year and the Christmas Day tornado that struck in 2011. Additionally air ambulances and ground ambulances from surrounding jurisdictions could be called in to provide mutual aid.

Herrin ended the meeting by asking those present to continue to think of ways to best respond to and deal with the aftermath of such an emergency situation, including who would be the point of contact for the flood of media that would ensue.