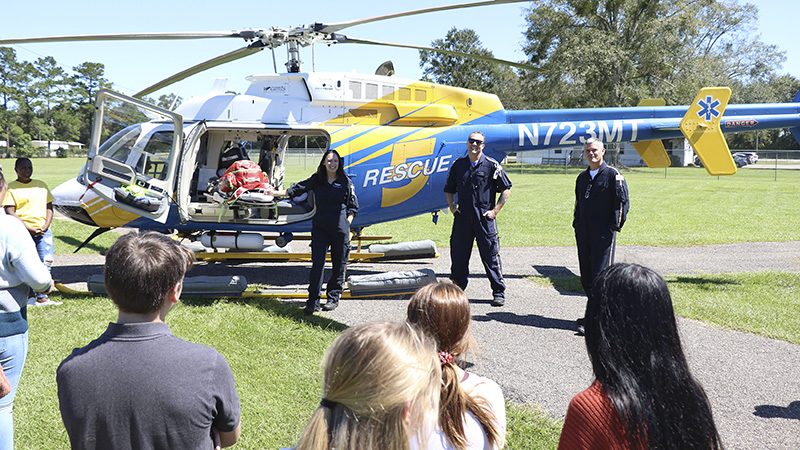 A group of health class students attending Pearl River Central High School got a personal tour of Rescue 5, the local ambulance helicopter that provides the service ti this region. The helicopter and its staff will be at a blood drive planned for Dec. 18 in Picayune. File photo

With blood supplies still being in short supply, another blood drive has been organized, this time between Mississippi Air Rescue 5 and Mississippi Blood Services.

The event will be held on Dec. 18, at the Life Church in Picayune, located at 801 Highway 11 South, which was previously one of two Winn Dixie locations in town.

Ashley Craft, a registered nurse with Mississippi Air Rescue 5, said the blood drive was organized due to the continued short fall of blood and plasma. The event will also feature the Air Recue 5 helicopter and its staff, who will be on hand to answer questions and provide a tour of the aircraft along with firefighters with the Picayune Fire Department, and an ambulance and staff from AAA Ambulance Service.

Santa Claus is also scheduled to make an appearance and several door prizes will be given out to those who donate blood. The door prizes were provided by local businesses.

Craft said that hospitals in the state of Mississippi require 250 to 300 blood donations per day to keep up with the medical demand, but on average only about 200 donations are being made daily.

One unit of blood can save up to three lives, and Craft said the helicopter on which she conducts her work typically has three units of blood on hand.

Currently, the most requested blood types are both variants of the O blood type along with plasma.

“It’s a scary thought when you have a loved one who needs several units of blood and it may not be available,” Craft said.