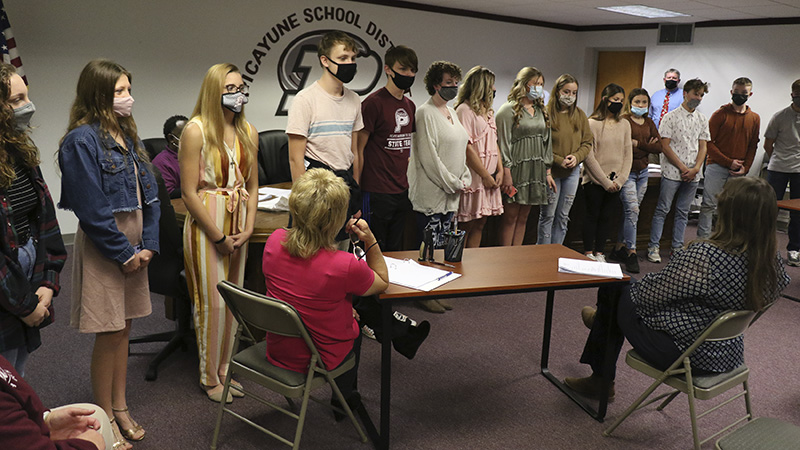 Members of the Picayune School District’s Board of Trustees heard about the success of the varsity swim team over the past season and heard from a parent of a participant of the team that there is a need for the district to build a pool for the team to use for practice sessions and home competitions.

Head Coach Rachael Rutherford said that several members of the team placed in the State Swim Championship held in September.

Taggard also placed 9th in the girls 100 back event.

In the boys 100 back stroke event, Ryder Burge placed 13th.

Taggard, Burnett, Lily Ginn and Stevenson also placed eighth in the girls 400 relay race. During that event, Rylee Martin was the alternate.

In other business, Jeff Luckie spoke to the Board again about the need for the swim team to have better practice and competition day accommodations. The pool the team currently uses for practice sessions and for home competitions is located at Millbrook Country Club. His complaint is that the pool is not maintained as well as it should be, and the Maroon Tide’s team has to spilt practice sessions with other teams in the area, such as Pearl River Central’s Blue Devils and a local private school. Additionally, the team has to pay $4,000 to use the pool for the season since the facility is not owned by the district the team can’t generate revenue through the sale of concessions or even charge for admission to competitions.

Luckie said he would like to see the district construct an indoor facility. If such a facility would be built, then Luckie said it could generate some revenue for the district by renting it out to other schools in the area and possibly through water aerobics classes.

No decision was made on the matter by the Board during Tuesday’s meeting.