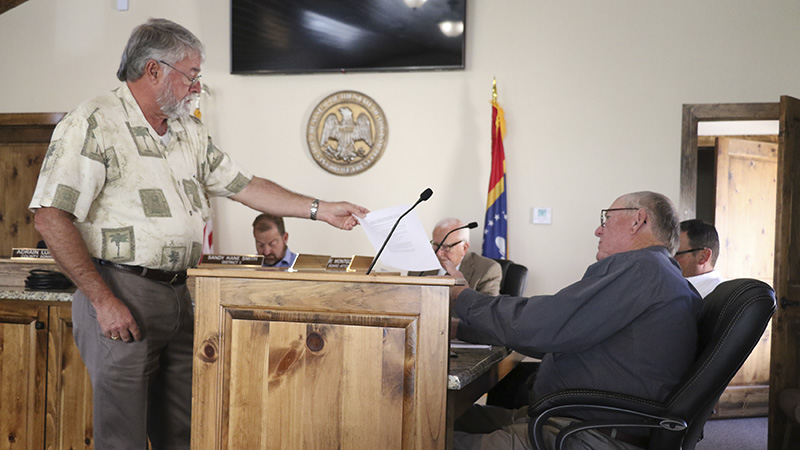 During Wednesday’s meeting of the Pearl River County Board of Supervisors, Sheriff David Alison asked for the creation of an ordinance making the sale of certain vape products illegal.

Allison said the ordinance would specifically focus on the sale of vapes containing controlled substances or synthetic versions of those substances.

His concern is that some stores have been selling vapes containing synthetic controlled substances, which was part of a recent operation conducted by the Pearl River County Sheriff’s Department and the Picayune Police Department last Friday. That operation involved several businesses in Picayune, one in Poplarville, one in the county and two homes associated with the owners of some of those businesses.

Allison said that while he couldn’t recall the exact substance involved during the meeting, he did say that the substances in question are dangerous, and were attributed to the overdose of two high school students in this county recently. Those individuals have since recovered.

District III Supervisor said he went into one of the businesses involved in the operation prior to it being conducted, Valero in Picayune, and was shocked to see that the store had “bong pipes” on the shelves.

No action was taken on the request for an ordinance during Wednesday’s meeting.

Additional details on the operation conducted last Friday evening will be released at a later date.

Also during the meeting, the Board heard from Pearl River County Airport Board of Trustees member Darrell Fuller about some grants that will provide funding for maintenance work at the facility. Recently the airport was approved for about $22,000 in CARES Act funding that can be combined with two previous awards totaling about $30,000 to help with general maintenance costs, such as keeping the grass cut.

Another grant totaling $720,000 was also awarded that will fund the installation of brand new taxi way and runway lighting at the airport. The 100 percent grant will mean the airport will have brand new LED lighting said to last about 50 years. Fuller informed the Board that the previous bidder who won the contract a month ago came back to him to request $100,000 more than the company had bid because the company felt it underbid the project.

When the federal granting agency declined to provide the additional funding, Fuller said the contract was awarded to the second best bidder, Utah Construction.

The work will include installing new lighting and wiring along about 5,000 total feet of runway (4,000 feet) and taxiway (1,000 feet). The existing wiring will be removed and new wiring will be installed as part of the project.