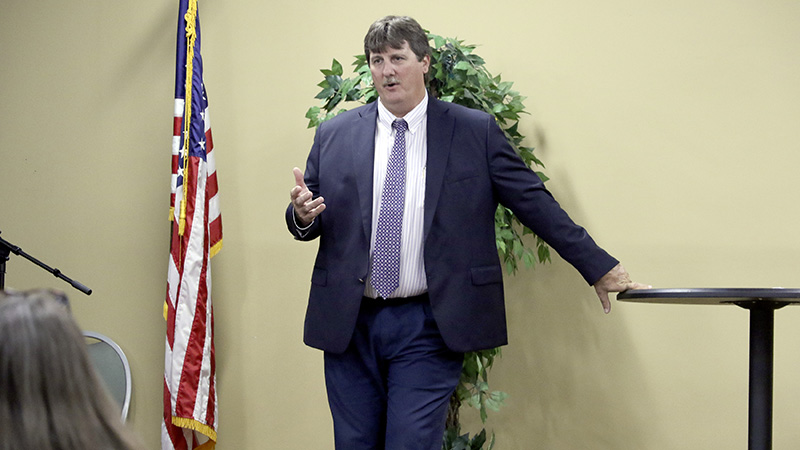 County Administrator Adrain Lumpkin gave attendees of PRCC’s most recent Lunch and Learn valuable information about how their tax dollars are used to keep the county and cities running. Photo by Jeremy Pittari

As the saying goes, two things in this life are certain, one of them is taxes.

While many adults reluctantly pay their taxes and forget about them, many may wonder where their hard earned taxes go and how they support the community.

That was the topic of Pearl River Community College’s Lunch and Learn, presented by County Administrator Adrain Lumpkin earlier this month.

He began the presentation with a brief outline of the county’s budget. Pearl River County’s general fund totals $20 million for this fiscal year, of which about $12.7 million is generated locally from tax collections. The rest comes from federal sources ($2.4 million), state sources ($1.2 million), licenses, commissions and fees ($929,000), miscellaneous sources ($1.3 million) and various other sources.

Collecting those taxes is a complicated process that includes determining where property is located based on one of eight distinct tax districts, which are based on city and school district lines. While the rates vary by the school district and other factors, a large portion of a homeowner’s ad valorem taxes go to their respective school district.

Lumpkin added that the car tags also provide the county with funding and it’s also one of those things residents complain about having to pay.

But with those funds, some improvements have been made in the county, including a new annex for the county courthouse, a new meeting place for the Board of Supervisors and a soon to be completed office space for Lumpkin and his staff.

One other project still to be completed include a new office space for the MSU Extension Service set to be constructed off of Highway 26 near the National Guard armory.

A major challenge county governments face in funding is that a portion of sales tax collections are not sent to counties like they are to cities. The only new money coming to county governments at this point is due to a new law that allows for the collection of Internet sales tax, a portion of which is being sent to counties. The last payment to Pearl River County was for $1 million this year, which was more than the anticipated payment of about $440,000.