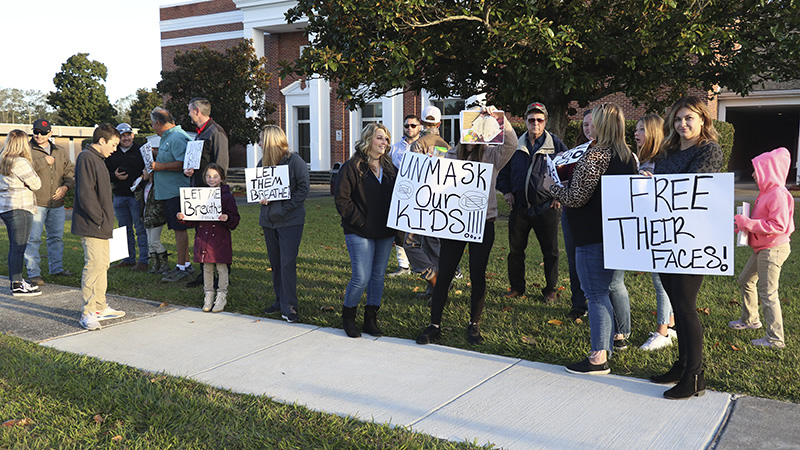 A group of parents and children stand outside the Picayune School District office Friday morning to protest the mask mandate before the School Board held a meeting where the mandate was reversed. Photo by Jeremy Pittari

Mask use by students and staff at the Picayune School District will no longer be required starting at 3:15 p.m. today.

That decision was made by the Board of Trustees during a meeting held Friday morning. Before the meeting, several people were gathered in front of the district office holding signs that protested the ongoing mandate forcing staff and students to wear masks while in school.

Superintendent Dean Shaw said the matter was put on Friday’s agenda because the district had to provide the Mississippi Department of Education with an updated return to school plan. The initial proposal to the Board concerned lifting the mask mandate at the end of the school day on Friday, which is 3:15 p.m. Since students will be out for the Thanksgiving holiday next week, that essentially means the change will not take effect until Nov. 29.

Initially that proposal failed due to a tie vote, which involved Board members Jarrell Meyers and Josh Robertson voting for the change and David Mooneyhan and Jake Smith voting against it. Smith attended Friday’s meeting via teleconference.

However, when Shaw presented the alternative change, which stated the mask mandate would be reconsidered after the Christmas break by reviewing the COVID case numbers from this year and comparing them to last year’s numbers, Smith asked to reconsider the first motion he made, saying his phone cut out and he misunderstood what was initially being proposed.

The second vote on making the change effective at 3:15 on Friday, Nov. 19, passed by a 3-1 vote, with Mooneyhan being the only Board member to vote against it.

Ashley Alford, a parent of students who attend the district and one of the only people to vocally oppose the mandate at a meeting held on Nov. 9, said she is glad the Board made the change. Alford was also part of the crowd that was in front of the district office Friday morning.

After the Board approved the change, a handful of the protestors who attended the meeting cheered and voiced their appreciation to the Board.

“We’re excited because the kids get a little bit of their normal life back,” Alford said. “Now we can get back to education.”