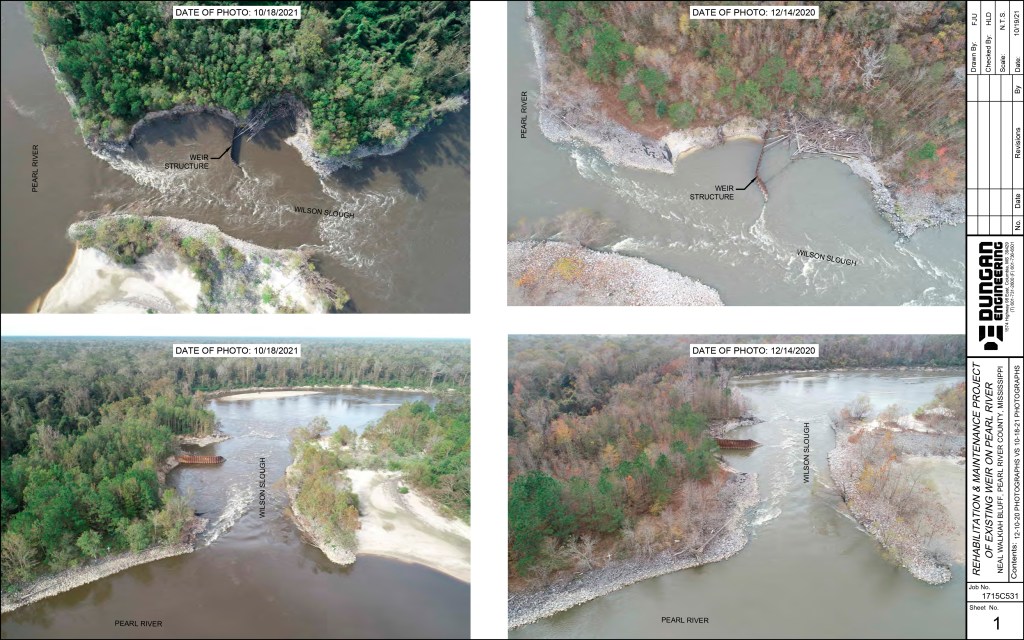 History may repeat itself if nothing is done to correct the flow along the Pearl River at the weir in Walkiah Bluff, also known as Wilson’s Slough.

Les Dungan with Dungan Engineering has been keeping an eye on the weir at the behest of the Pearl River County Board of Supervisors, and has noticed a disturbing trend over the past 10 months, the weir is failing. According to drone footage shot by the engineering firm, noticeable erosion can be seen.

Originally constructed by the Marine Corps of Engineers in the late 1990s to correct the drying up of the East Pearl River, which also acts as the state line between Mississippi and Louisiana, the intent of the weir was to evenly divide low water flow between the two states.

But that intent was never realized. Duggan said during low flows the division of water is about 15 percent to Mississippi while the remaining 85 percent flows down the weir towards Louisiana.

Prior to the construction of the weir during periods of low flow the east Pearl River was dry in the late 90s.

“That will happen again if nothing is done,” Dungan said.

The section of the river under threat involves about 18 miles of the river that eventually flows under the bridge near exit 1 on Interstate 59 and then connects to Holmes Bayou.

If that section of the river dries up, the boat launch at Walkiah Bluff will be unusable, which Dungan said is used by residents of Mississippi and Louisiana to access public lands in both states.

A few years ago, about $4 million was set aside to repair the weir after the Pearl River Basin Development District was dissolved. Dungan said that while that amount of money could have fixed the problem back then, today, years later, the erosion of material at the weir has only increased as has the cost to repair the problem.

If nothing is done to fix the problem, Dungan said the river will change course permanently, and the east side of the river will dry up again during low flows.

To get the ball rolling, Dungan said he was in talks with Mississippi Department of Wildlife, Fisheries and Parks to sponsor the repair, but recent discussions appear to show that agency is becoming unwilling to take on that responsibility. He said that representatives with the agency have suggested he contact the Marine Corps of Engineers to sponsor the project.  If the Marine Corps of Engineers becomes involved, Dungan said that process may require an environmental study that would take two to three years.

Efforts to repair the weir are now at a stand still.