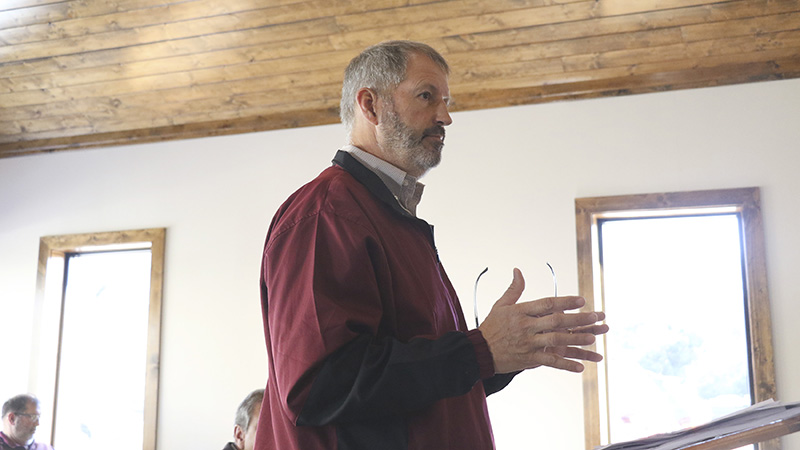 Les Dungan with Dungan Engineering provides the Pearl River County Board of Supervisors with recent information concerning progress being made in the countywide paving project. Photo by Jeremy Pittari

The daily rate paid to the Pearl River County Sheriff’s Department for housing federal inmates has been raised and the first phase of the countywide paving project is close to completion.

Sheriff David Allison informed the Board of Supervisors during Monday’s meeting that he negotiated the rate from about $40 a day to $55 a day, which is paid to the county in exchange for housing federal inmates at the county jail. He was also able to get the rate paid to corrections officers who transport federal inmates increased from $20 an hour to $25 an hour.

In a separate matter, Allison said the jail was struck by lightning during last Wednesday’s storm, which also brought a tornado to Picayune.

Allison said the lightning strike damaged about $20,000 worth of networking equipment, and this is not the first time in recent history the building has been struck.

Carey Meitzler said the jail was struck about 18 months prior and that facility is known to suffer strikes that cause electrical damage regularly. He added that every effort to put all electrical equipment on surge protectors has been taken already.

County Administrator Adrain Lumpkin said that Coast Electric has looked at the building and done all the company can do to protect the facility from lightning. The last quote to have lightning rods installed on the building came in between $30,000 to $40,000. No action was taken on that matter.

In relation to the countywide paving project, Les Dungan with Dungan Engineering said there are about 14 miles of roadway left in the total project for the first phase, of which 10.5 miles is under the contractor’s set of duties to pave with hot mix and the other four miles will be DBST roads constructed by county employees.

The total project was set to pave 32 miles of roadway.

Since the cost to pave a mile of road is still coming in under budget, $80,000 per mile for hot mix and $30,000 for DBST with base reclamation, Dungan feels confident there will be more money to pave more roads.

During that discussion, District III Supervisor Hudson Holliday expressed concern that even though the plan was to pave more than 30 miles this year, it’s still not enough to ever catch up. His argument was that the county already budgets enough annually to pave about 20 to 25 miles of the 800 miles of roads the Board of Supervisors maintains. His thinking is that since the county took out a $9 million bond to pave 140 more miles of roads than are paved annually over three years, the project should have included about 70 miles of roads in phase 1 in order to catch up.

After some discussion it was determined that the Board will tie in the annual $1 million set aside in road maintenance material costs to the countywide paving project to bring the total project cost to about $12 million and attempt to pave more roads each year during the remainder of the three-year project.