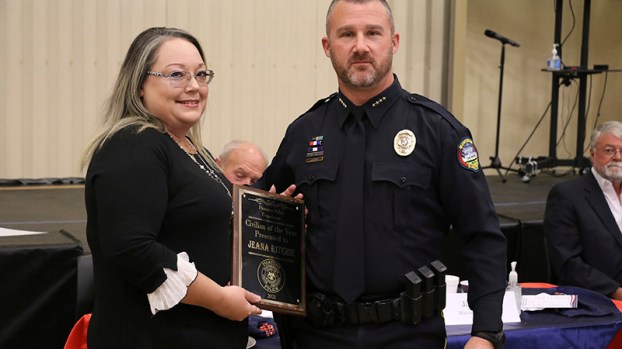 At left, Jenna Ritchie was named Civilian of the Year for the Picayune Police Department. She is joined by Chief Joe Quave. 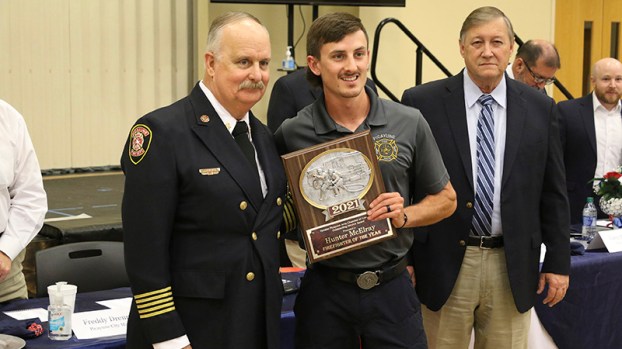 Hunter McElray, at right was named Firefighter of the Year at this year’s Police and Firefighter Awards Luncheon. He is pictured with Fire Chief Pat Weaver. 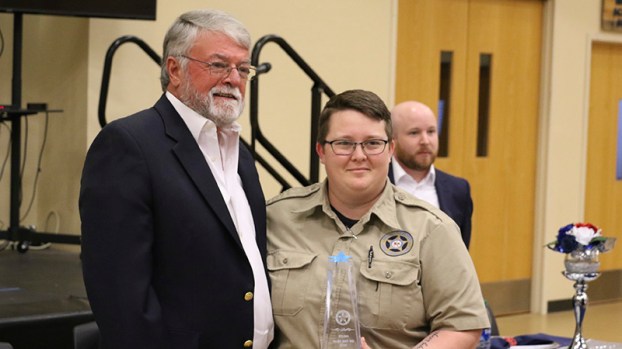 At right, Kristen Flemming was named Jailer of the Year for the Pearl River County Sheriff’s Department. She is joined by Sheriff David Allison. 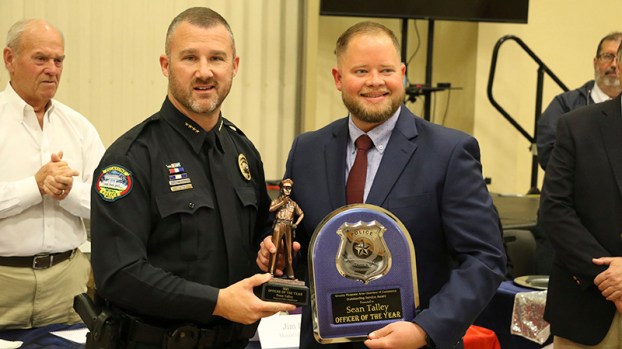 At Right, Sean Talley was named Officer of teh Year for the Picayune Police Department during the annual Police and Firefighter’s Banquet, held by the Greater Picayune Area Chamber of Commerce. He is joined by Police Chief Joe Quave. 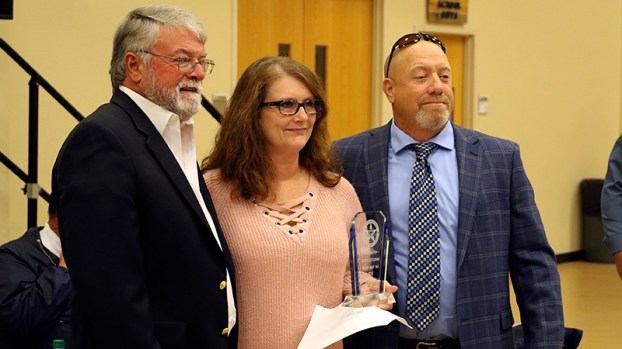 Jerry Flemming was named Investigator of the Year for the Sheriff’s Department. His wife, Penny, center, accepted the award on his behalf. She is joined, from left, by David Allison and Rob Williams. 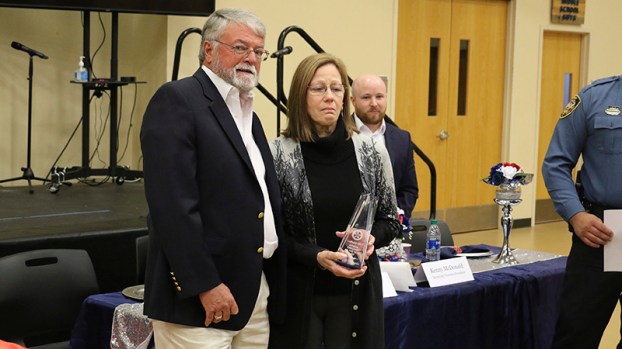 Roy D’Arcangelo was named Civilian Employee of the Year for the Sheriff’s Department. His wife Cathy accepted the award posthumously from Sheriff David Allison. 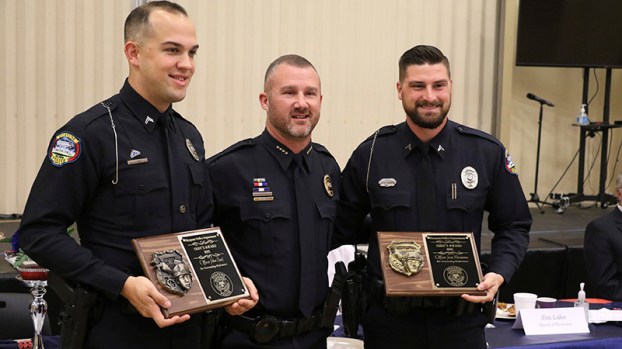 From left are John Seal, Picayune Police Chief Joe Quave and Jesse Neumann. Seal and Neumann were selected for this year’s Chief’s Award for the Picayune Police Department. 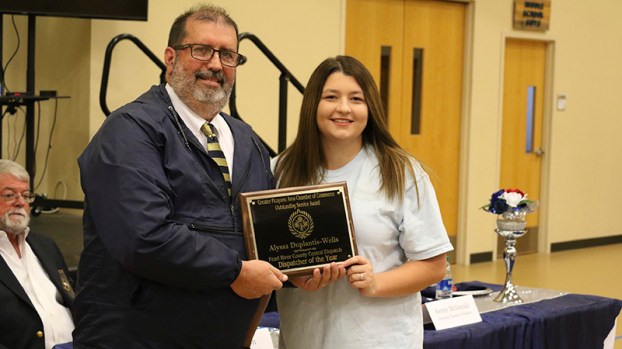 Alyssa Duplantis-Wells was named Dispatcher of the Year within Pearl River County. She is joined by Carey Meitzler.

Law enforcement officers, firefighters and dispatchers with local agencies were recognized for their daily efforts to keep the city of Picayune and Pearl River County safe during the annual Police and Firefighters Award Luncheon, sponsored by the Greater Picayune Area Chamber of Commerce and several local businesses.

This year’s Firefighter of the Year is Hunter McElray. Picayune Fire Chief Pat Weaver described him as a trustworthy man with a positive attitude who always gives 100 percent. During his five years at the department, he has undergone various training including becoming a smoke diver, rescue technician and learning how to deal with hazardous materials. McElray is also part of the state’s human trafficking task force.

This year’s Officer of the Year is Sean Talley. Picayune Police Chief Joe Quave said described him as a person with a strong work ethic who is always looking for ways to improve not only himself, but the department as a whole.

For the Chief’s Award, Quave chose two officers, John Seal and Jesse Neumann. He said they both lead in the number of arrests within the department.

This year’s Civilian of the Year is Jenna Ritchie. Quave described her as someone who never hesitates to take on an assignment. She joined the department in 2017 as a file coordinator and was appointed the department’s executive secretary in 2020.

This is the first year that the Pearl River County Sheriff’s Department was invited to participate in the awards banquet.

Sheriff David Allison named Neil Dugas as his first Deputy of the Year. Dugas was described as someone who furthers his knowledge with continuous training. He is currently participating in accident reconstruction training, which entails a set of classes said to be the hardest a law officer can take. He has also racked up more than 100 DUI arrests during his three years of employment with the department. Dugas was unable to attend Tuesday’s banquet.

This year’s Investigator of the Year for the Sheriff’s Department is Jerry Fleming. During his time with the department, he used his crime scene investigative skills to solve countless crimes and return untold amounts of property back to the rightful owner. Since the award was presented to him posthumously, his wife Penny accepted the award.

This year’s Civilian Employee of the Year for the Sheriff’s Department is Roy D’Arcangelo. His experience included working with the New Orleans Police Department starting in 1969. In 2008, he came to work with the Sheriff’s Department after his retirement, and continued to work there until this year. His duties included ensuring inmate accounts were correct and checking all incoming mail to ensure contraband was not getting into the jail. Since his award was also presented posthumously, his wife Cathy accepted it on his behalf.

This year’s Jailer of the Year is Christian Flemming. She was described as being a person of great responsibility and character who displays integrity and leadership qualities.

Another new award this year is that of Dispatcher of the Year. Carey Meitzler said dispatchers have a tough job since they hear what is on the other end of an emergency call. In order to chose the winner of this award, he asked law enforcement officers to fill out a survey, with the last question being to chose the person they want answering their 911 call when an emergency arises within their own family. The person they chose was Alyssa Duplantis-Wells.