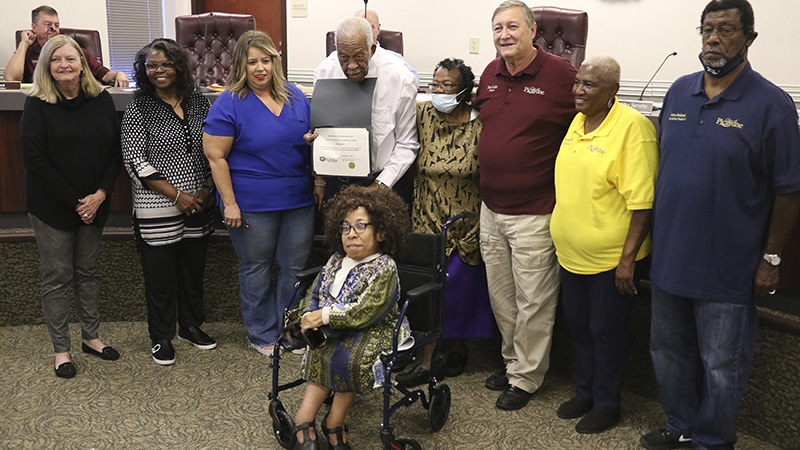 From left are Picayune Housing Authority Board members Ruby Stentz, Mary Bolden, Antha Mitchell, and Lex Doby, who recently stepped down from the position after 41 years. Also pictured from left are his wife Christine, May Jim Luke, Councilors Lynn Bogan Bumpers and Larry Breland and at front is Constance Doby. Photo by Jeremy Pittari

Picayune’s City Council heard an update about the Highway 11 widening project, and recognized a long time member of the Picayune Housing Authority Board who is stepping down.

Damon Wynn, a project manager working on the widening of Highway 11, said that the work on west side of the roadway is expected to be asphalted by next month, with a traffic swap set for mid December.  The next phase of the project will be to move all traffic to the outside lanes so crews can begin installing the concrete dividers and islands.

By spring, the work will shift to putting down a top layer of asphalt, with an anticipated completion date within the first to second quarter of 2022.

In other business, the Council recognized Lex Doby for his many years of service on the Picayune Housing Authority Board.

Mayor Jim Luke said that Doby was being recognized for his 41 years of service on the Board. Ruby Stentz thanked him for his service and said that she enjoyed working with him on the board for the past six years that she has served.

“If I had to do it all over again, I wouldn’t change a thing,” Doby said.

Councilor Larry Breland warned him that his “honey do list” will get longer now that he is no longer serving on the Board.

His wife, Christine said, that she is blessed to have Lex by her side, whether she needs his help or not. His daughter, Constance, said one thing to her father: “I love you very much.”

City Manager Freddy Drennan also made an announcement during the meeting that the Farmers Market is now set to return to the green space behind the Greater Picayune Area Chamber of Commerce now that all permits and proof of insurance have been filed with the city. He said the market should resume operation in the next two weeks, and will operate on the same days and times as in the past. According to previous coverage the market was open on Wednesdays.