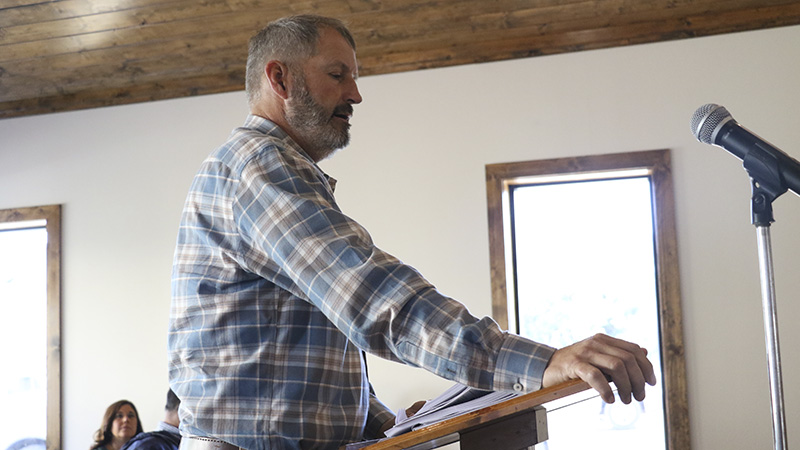 Les Dungan with Dungan Engineering speaks to the Board of Supervisors during a meeting held on Nov. 17, concerning the county being named the project sponsor in relation to repair of a weir along the Pearl River in the Walkiah Bluff area. Photo by Jeremy Pittari

Pearl River County’s Board of Supervisors has been named as the sponsor in the project needed to repair an aging weir along the Pearl River.

Previously, that responsibility was under the Pearl River Basin District, but that organization was dissolved back in 2018.

Now, the $4 million set aside under the Pearl River Basin District to repair the weir is still available, but it will cost more than that amount to correct what years of erosion have caused.

However, with the Board of Supervisors being named as the sponsor, County Administrator Adrain Lumpkin said that puts the county in the driver’s seat in relation to moving the project forward. Lumpkin informed the Board that the $4 million can only be used to repair the weir.

Les Dungan with Dungan Engineering said it will cost more than $4 million to repair the weir because of damage caused by continued erosion, which has made the issue along the river more dire. He estimates that if something is not done soon, the Mississippi side of the Pearl River will be dry during the months when rainfall is minimal. With no water along that side of the river, access to the river from the boat launch at Walkiah Bluff will be closed since the river will be dry.

The weir was constructed back in the late 1990s by the Corps of Engineers with the intention of evenly dividing flow along the river between Mississippi and Louisiana. Even though there are doubts as to whether the flow was ever 50/50 upon completion of the project, Dungan estimates the split is more like 85/15 today, with Louisiana getting the bulk of the water.

Dugnan said the next step will be for the county to get the proper permits for environmental and wildlife protection from various agencies and permits from the Corps of Engineers.

He added that a draft of the plan is ready.

Maintenance of private roads has been a topic at Board meetings recently. The Board is trying to find a way to ensure that people who purchase property along a private road are aware that they will be responsible for the upkeep of those roads. While language is typically included in the deed and other paperwork when the home and land is purchased, many people either don’t understand the language or don’t read the paperwork. District III Supervisor Hudson Holliday suggested making the language more clear and possibly putting it in bold text, and Board President Sandy Kane Smith suggested potentially putting up signs alerting prospective land buyers to that fact as they enter a subdivision still under construction. Smith said the signs would be helpful, especially to those who move to Pearl River County from out of state where regulations are different.

District IV Supervisor Jason Spence suggested mandating all new subdivisions be built with roads made of asphalt instead of gravel.

The Board also discussed the need for a multipurpose building in the county to hold large events, such as concerts and conferences.

Pearl River County Economic Development District Project Manager Christy Goss also updated the Board concerning a couple of events that are coming up. Since January is National Blood Donor Month, blood drives will be held for county employees who want to donate. A drive will be held in Picayune on Jan. 18, and on Jan. 19 a similar event will be held in Poplarville. During both events a blood mobile will be stationed in a central location. She said that even though the drive is being offered to governmental employees, anyone who is willing can donate during those dates.

Also, healthcare workers in this county will get some recognition for their dedication and sacrifice during the pandemic on Dec. 9 in Picayune at Highland Community Hospital and on Dec. 10 at the Pearl River County Hospital and Nursing Home. From 6 to 9 a.m. on those days staff from the night and day shifts will be provided with coffee.

Lumpkin said that a county employee appreciation luncheon is planned for Dec. 13 in Poplarville and Dec. 14 in Picayune. During those dates employees in the respective cities will be provided with lunch from Dixie-Que and dessert from Paul’s Pastry.