Supervisors hear from family who lost property due to mix-up 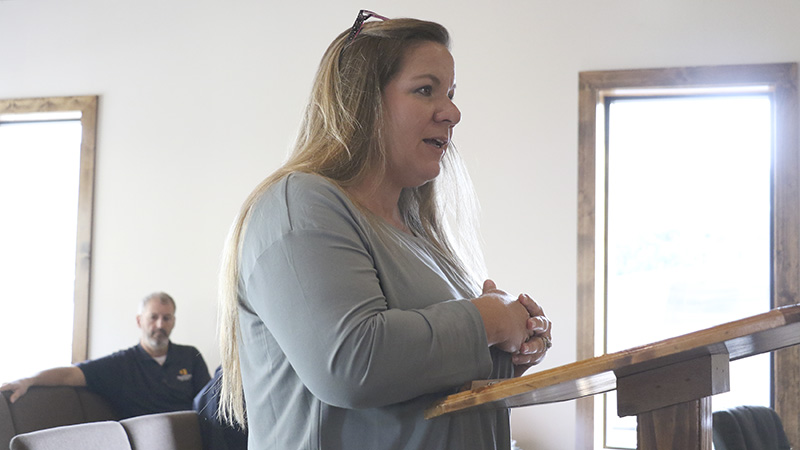 Ava Carver spoke to the Pearl River County Board of Supervisors on behalf of her daughter, who has recently lost her home due to some sort of records mix-up. She asked that the Board provide any help that would help her daughter reclaim ownership of her home. Photo by Jeremy Pittari

A Pearl River County resident addressed the Board of Supervisors about a tax record mix-up that may cost her daughter ownership of her home.

Ava Carver stood before the Board Wednesday morning to share her story about the incident. Prior to the Board hearing Carver out, an executive session was held for pending litigation.

County attorney Joe Montgomery said the that since the Board received an email the day prior that Carver’s daughter, Tiffany Ingram, has hired an attorney, the Board was restricted in what they could say. Carver said she decided to speak to the Board on her daughter’s behalf.

However, those members in attendance Wednesday did hear her out.

Carver began by saying that two years ago her daughter’s father passed away, and left her some money. At the time the family lived in another area, but after the man’s death Carver convinced her daughter to move back to Pearl River with her.

Her daughter purchased some property that she thought included a fully constructed home.

But within the last month, the family began getting notices from an investment company that they needed to start paying rent or would be forced to move out. At first, Carver thought it was a scam, but further investigation determined a mixup with the properties resulted in her daughter purchasing an empty lot next to the home she thought was hers.

At some point, the lot and home she thought was hers was sold at a tax sale because the builder sold Ingram a lot instead of the home, Carver said. Then, somehow the empty lot was recorded in the county tax record as having a home on it.

Requests to have the tax sale reversed have determined it will be a complicated process, Carver said.

Since the family was unable to get in touch with the builder or get a straight answer from the county, an attorney has been hired to represent Ingram and her interests.

Montgomery and District IV Supervisor Jason Spence told Carver that if there is anything the Board can do, they will try their best. No further discussion was had on the matter.