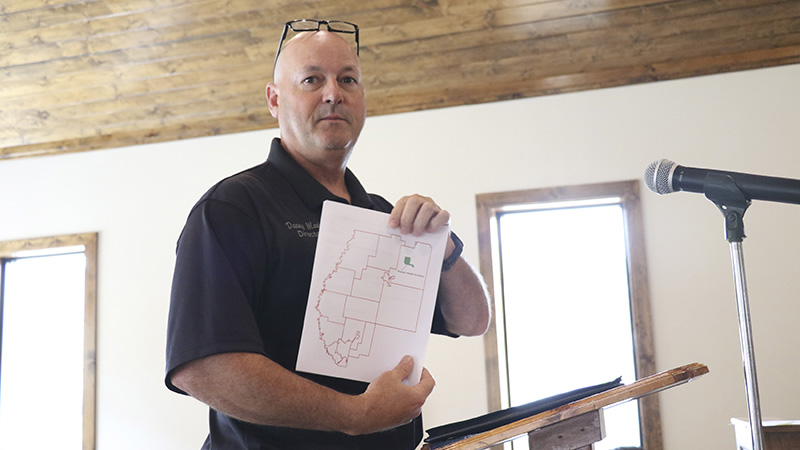 Pearl River County Emergency Management Director Danny Manley shows a map of a fire district he would like to form in the Hillsdale area to help those residents get discounts on their fire insurance premiums. Photo by Jeremy Pittari

Members of the Pearl River County Board of Supervisors received an update in relation to the progress being made in this year’s county wide paving project.

Les Dungan with Dungan Engineering said that the costs for the project are still coming in less than budgeted. His review of the cost to pave a mile of road using DBST with a concrete strengthened base is costing about $25,000 per mile, while hot mix asphalt overlay costs are coming in at $79,000 per mile.

Part of the success with getting so much work done so quickly was due to the rental of a road bed reclaimer, which costs the county about $15,000 for the first month and $12,900 for each month thereafter. Road Department Manager Charlie Schielder said the reason it cost more for the first month was because transportation fees were included.

So far, 18 total miles of roadway have been paved. Dungan said the progress means the project is still slated to be complete by the end of the year.

Striping those roads may take a bit longer since the contractor hired to that work is doing similar work for the city of Picayune. However, striping was completed on Burnt Bridge Road and Spring Hill Road.

When asked about the possibility of purchasing a reclaimer machine similar to the one the county rented, Dungan said he could not definitively say if purchasing one would be more  cost effective because he does not what the long term maintenance costs would be.

Emergency Management Director Danny Manley addressed the Board about the insurance policy for the volunteer fire departments. Manley said that the individuals from Olinde Porche Insurance who spoke to the Board during a meeting held last month provided a better quote than the company that has been providing that coverage. Manley said the quote from Olinde was $27,000 less than the company from which the county had previously purchased coverage. The total cost of the cheaper policy was $139,388, which provides insurance for all of the county’s volunteer fire departments.

Manley also asked the board to consider establishing a fire grading district in the Hillsdale area to help those residents get a cheaper fire insurance policy. However, Board attorney Joe Montgomery advised the Board to wait to take action on that matter since he had things to discuss with Manley about that matter.