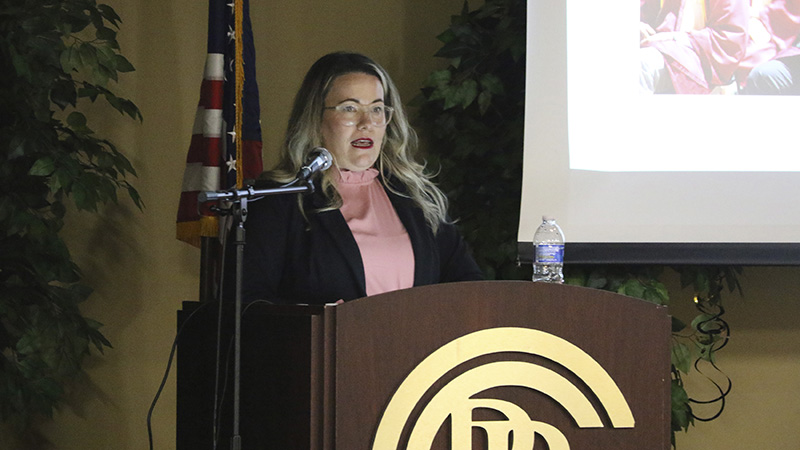 Attendees of Pearl River Community College’s most recent Lunch and Learn got a peek into the field of economic development.

Lunch and Learn is a program held at PRCC that usually features a local professional who gives attendees insight into their field.

Ward said the statistics show that the population in the county as a whole has grown slightly, as has the population in Picayune, while Poplarville’s population declined slightly. She added that this area saw a Census participation rate that was below Mississippi’s average of 60.4 percent, with only 58.5 percent of local residents responding.

She also presented slides depicting where Pearl River County residents work. While most work in the area of the Gulf Coast, some have jobs as far away as California.

“This shows how global Pearl River County is,” Ward said.

Most people who live in this county, work in this county. Ward said her research shows 9,253 residents of this county work here, while 2,647 work in St. Tammany Parish, 852 work in Orleans Parish and 801 work in Hancock County.

It works both ways however. There are about 512 St. Tammany Parish residents who work in Pearl River County, and about 500 Hancock County residents who do the same.

Most jobs within this county are retail based (18.2 percent), with other major jobs entailing health care and social assistance (16.2 percent), education (11.9 percent), accommodation and food services (9.7 percent) and construction (7.5 percent).

Another major employer in this area is Stennis Space Center, with 1,121 Pearl River County residents working there as of 2018.

Currently, most residents need to drive outside of this county to get to work, on average about 34.2 minutes each way.

To reach the goal of more residents working closer to home, Ward said that county has a 10-year-plan with five priority strategies, which include site development, target industry recruitment, marking and image, business retention and expansion and regional collaboration.

A sticking point is there are not many sites ready for development locally. In Picayune and Poplarville, there are only two to three parcels left in those respective industrial zones, which are under public control. Ward said parcels in public control are more attractive because those sell for less.

With Pearl River County being in a prime location on the Gulf Coast and having access to the interstate and rail, it’s an ideal place for a distribution center to locate.

The next Lunch and Learn will be held on Nov. 2 and will feature County Administrator Adrain Lumpkin. The event will be held from 11:30 a.m. till 1 p.m. and tickets are $10 each. To RSVP send an email to bwells@prcc.edu by Oct. 26.