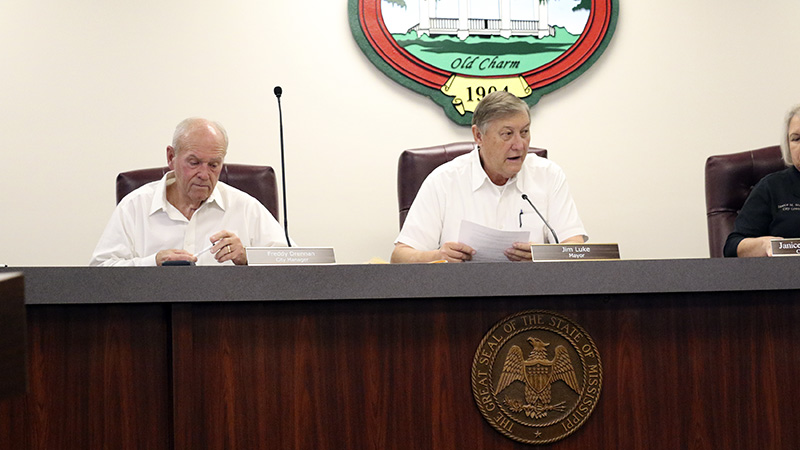 From left, City Manager Freddy Drennan and Mayor Jim Luke prepare to hold a special call meeting held on Tuesday, where the Council approved a motion to hire a temporary city clerk. Photo by Jeremy Pittari

During that meeting, the Council approved a motion to authorize the city manager’s signature on a service agreement with SMPDD for that service.

The cost of the contract is up to $15,000 for up to six months of work. If the contract needs to be extended, that matter will be brought back before the Council.

When asked why the city needed a temporary city clerk, the Item was advised that the city’s previous city clerk, Amber Hinton, resigned. When asked why she resigned, Drennan referred the Item to Hinton. Drennan said a replacement for Hinton had not been hired as of Tuesday.

The Item also asked why the chief deputy city clerk could not do the job, to which City Manager Freddy Drennan said, “This person we’re bringing on board has 23 years of experience… I want to make sure that we have somebody here that can make sure we do everything properly, the way it should be,” Drennan said.

When contacted by the Item for comment, Hinton said she had no comment concerning her resignation, but added that the chief deputy city clerk resigned from that post in August of this year.