Domestic Violence Awareness Month proclaimed by Board of Supervisors 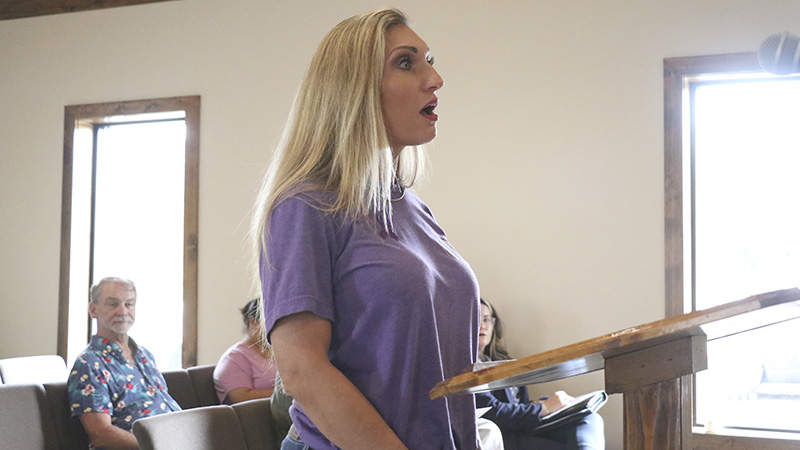 Jamie Boyer, with the Gulf Cost Center for Nonviolence, thanks the Pearl River County Board of Supervisors for its continued financial support and for declaring October as Domestic Violence Awareness Month during Monday’s meeting. Photo by Jeremy Pittari

The Pearl River County Board of Supervisors held a brief meeting Monday where its members approved a proclamation and agreed to sign a letter of support for the creation of a program at a university.

After the Board approved a motion to declare October as Domestic Awareness Month, Jamie Boyer with the Gulf Cost Center for Nonviolence thanked the Board for approving the proclamation and for the Board’s continued financial support.

She said that $700,000 in funding cuts have made local support even more important.

In other business, the Board heard an update about the county-wide paving project that is underway.

Les Dungan with Dungan Engineering said striping along state aid roads that were recently paved, including Burnt Bridge Road and Oak Hill Road, has been put on hold until the contractor set to do that work can move on the project. Dungan expects the contractor to arrive sometime this week to complete that project.

In the effort to pave county roads, Dungan said that project is about 50 percent complete at this point, with 15 miles of the planned 32 miles being paved.

Dungan said he felt confident the remaining 15 miles would be complete by year’s end.

In other business, the Board heard a request from Economic Development Director Lindsay Ward for the Board to sign a letter of support to assist the University of Southern Mississippi in applying for funding from federal Economic Development Authority to help kick off the university’s two-phase project to increase economic development in the blue sector. The Board approved a motion to sign the letter.

The next meeting of the Board will be Oct. 20, at 9 a.m. in the Boardroom on West Pearl Street in Poplarville.