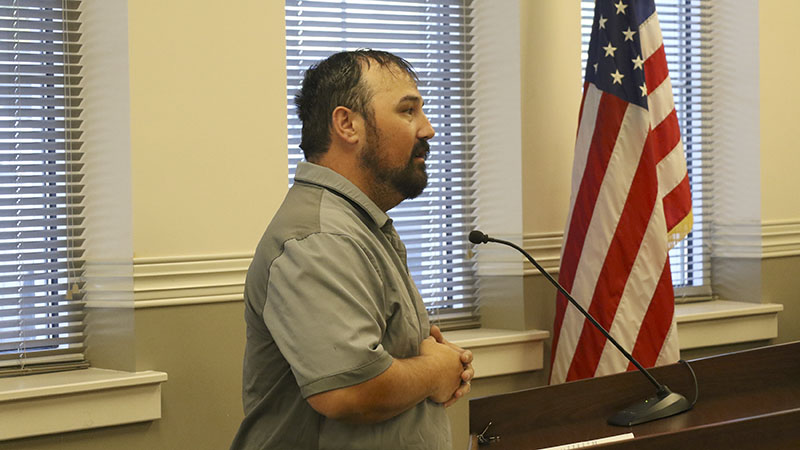 Parks and Recreation Director Trevor Adam provides the Picayune City Council with a rundown of the events set for this weekend during Tuesday’s Council meeting. Photo by Jeremy Pittari

During Tuesday night’s City Council meeting, councilors heard that there is an ongoing investigation into a rash of burglaries in the Millbrook subdivision and learned that the city’s grant administrator has turned in her two week’s notice.

When Councilor Anna Turnage asked for an update concerning the rash of burglaries in Millbrook, Police Chief Joe Quave said his investigators are working the case, but there is more work to do before he can divulge any more information.

In other business, City Manager Freddy Dreannan began Tuesday’s meeting with an announcement that Grant Administrator Christy Goss has turned in her two weeks notice after taking a position with the county. Drennan said her last day with the city will be at the end of the month, and she will be taking a position working with Pearl River County Economic Development District Director Lindsay Ward.

Fire Chief Pat Weaver said his department is back to full staff, and firefighters responded to more than 30 calls in the last two weeks.

Code Enforcement Officer Tom Milar said his department determined that one million more in taxes will be coming to the city. He said six more businesses are planning to establish in Picayune. Also during the month of September, his department conducted 46 inspections.

Parks and Recreation Director Trevor Adam said two events are planned for this weekend, one is a Midnight Madness tournament that will include 60 teams, 50 of which will be from out of town, to raise money for breast cancer awareness.

Also, a fundraiser is being held at the Bayou Bazaar, located behind Walmart, to raise money to help the city offset the match involved in a $1.9 million BP grant that will be used to renovate Friendship Park.

Police Chief Joe Quave said that over the past two weeks his staff have conducted five felony arrests, 12 misdemeanor arrests and responded to 749 calls for service.

A second round of debris removal from Hurricane Ida was performed in the city, said Public Works Director Eric Morris. He added that eight concrete pads have been poured at Crosby Commons in preparation for the installation of the corresponding number of memorial benches.

Public Works crews also put finishing touches on a new walk bridge at Shay Park, which was paid for by Picayune Main Street.

A test run of the WiFi hotspot at Crosby Commons during the most recent concert held by Picayune Main Street also went well.

The Council also approved a motion to seek bids for the exterior renovation of the historic side of City Hall. Morris said after bids are received and approved, the work should take about four to six months, depending on the weather.