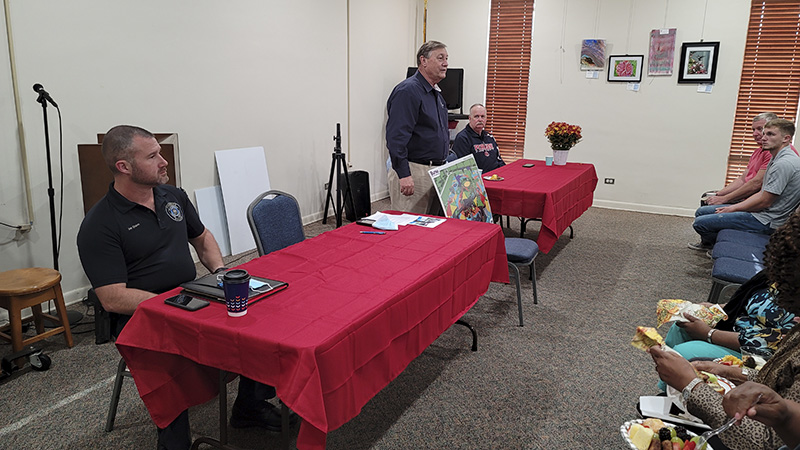 During a meet and greet event held at Holland Hall of the Margaret Reed Crosby Memorial Library in Picayune, attendees got a chance to hear updates from most of the city’s administration.

Mayor Jim Luke started things off  with updates about he work planned for Friendship Park as part of a $1.9 million BP grant. He said the plan is to turf 8 baseball and softball fields at the park. Doing so will free up some more city employees to cut grass in other places in the city. There will also be four more tennis courts constructed where the existing two now stand, opening up the possibility for tennis tournaments to be held in Picayune, said City Manager Freddy Drennan.

While not in this current project, Luke said he would like to be able to turf the soccer field at Friendship Park, but funding needs to be found. If that does occur, it would make the city the first in the state to do so. Drennan added that doing so would open the city up to year round tournaments, and thereby increase tourism.

To address a question he gets regularly concerning the many projects planned at the park, which also includes a new playground and two new bathroom facilities, he said the plan is to break ground by the first of the coming year and have the project complete by July 2022.

Luke also touched on the clearing of trees at exits 4 and 6 along Interstate 59. He said that the city is working on an agreement with a state transportation agency to get the exits in pristine shape, in exchange the city will adopt those areas and continue the maintenance and later install decorative signs in those areas.

The mayor also wants to see the creation of two dog parks in the city, one for small dogs and another for large dogs.

Drennan said the promise of better fields at Friendship Park has caused some tournament representatives to contact him about booking events. Bringing tournaments to the city will mean more tourism dollars for local businesses.

“I believe the city is on the verge of expanding and growing,” Drennan said.

Police Chief Joe Quave was also introduced to the crowd. He said that he plans to continue the working relationship currently held with the city and the Pearl River County Sheriff’s Department, especially since he used to work there prior to taking his new position.

Quave is also looking forward to the construction of a new police station. He said that a questionnaire from the engineering firm working on his project has been filled out so the firm knows what the department’s staff wants to have in the new facility. Also, Quave wants to add national accreditation to the department’s current state accreditation. Finally, his goals are to provide his staff with the training they will need to succeed.

Fire Chief Pat Weaver said his department is seeking grants to build a new live fire training facility, since the old one is unsafe to use. And, he plans to seek out grants that will provide the department with a portable safety trailer so they can teach children and adults about safety exiting a building during a fire. The department’s current class 4 rating also provides property owners with a discount on their fire insurance premiums.