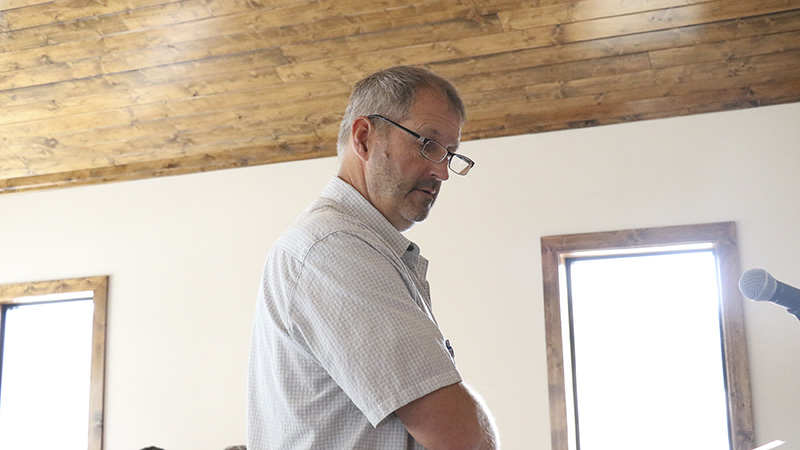 Les Dungan with Dungan Engineering said that so far the countywide paving project has resulted in about 13 miles of county roadway being repaired. Photo by Jeremy Pittari

A public hearing was held Wednesday morning by the Pearl River County Board of Supervisors concerning the need to redistrict the county.

County Administrator Adrain Lumpkin said the need to redistrict a county is based on several factors, including each census conducted every 10 years. Based on the county’s population, which according to the 2020 census is now at 56,145, and where those people live within the county, there will be a need to make changes.

Since the population did not increase that much since the 2010 census, which showed the population at 55,834, Lumpkin said the reason the districts need to be redrawn is because people moved from one district to another.

According to requirements in districting, this county should have districts with populations ranging from 10,892 to 11,566, but the population in district one was determined to be below the threshold, now at about 9,000.

However, if the county wants to try to avoid having too many residents in each district split up by House and Senate seats, the county has 45 days to submit a redrawn map to the state.

In other business, the county will not have to hold an election this November. During a previous meeting, Circuit Clerk Nance Stokes said that only one person qualified to run for each of the three open seats, which include one seat on the Picayune School District’s Board of Trustees, one seat on the Pearl River County School District’s Board of Trustees and one seat as an election commissioner.

Lumpkin said the county received word that since only one candidate is running for each seat, there will be no need to hold an election in November.

In another matter, the Board discussed preparedness for hurricane season. District II Supervisor Malcolm Perry said that he heard the generator at the county barn was working, but for some reason was not tied to the fuel pumps, meaning county employees had to contend with long lines after the storm to get gas. Lumpkin said that from now on all generators tied to county buildings or facilities will be tested before storm season. He also said that Chimney Square got some water inside the building during Hurricane Ida, possibly due wind blown water entering through aging caulk on the windows.

As for dispatch, Lumpkin said he was glad he was able to keep at least one dispatcher at the EOC in Poplarville to help provide real time information so the county leaders could make quick decisions.