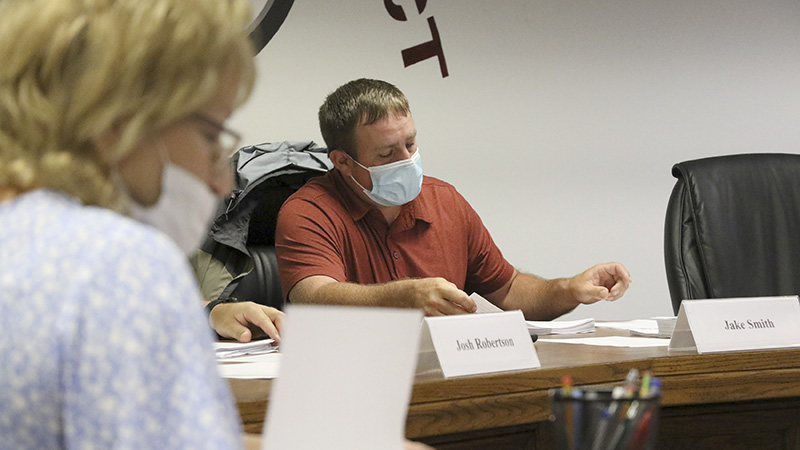 Jake Smith, a member of the Picayune School District’s Board of Trustees, reviews paper work during Tuesday’s meeting of the Board. Photo by Jeremy Pittari

Bids for vape and smoking sensors along with approval of a contract for construction of outdoor classrooms were approved by Picayune School District’s Board of Trustees.

During Tuesday’s meeting, the Board approved a motion to accept a bid from Talon Services Group LLC out of Hattiesburg for the procurement of vape and smoke sensors for restrooms in all campuses across the district. Superintendent Dean Shaw said the $70,000 quote will lead tot he installation of the sensors in all of the district’s 60 bathrooms across all campuses.

Several bids were also received from architectural companies in relation to the construction of outdoor classrooms planned for at least one elementary campus. Finance Director Lisa Persick said about five companies submitted bids, but the one that was the lowest and best came from Dale|Bailey-an Association, headquartered out of Jacskon.

She said their bid was better than the next best one, which was requesting 5.75 to 6.75 percent of the total project as their fee.

Persick said the project is expected to cost $500,000, but the project has not been bid yet. Administrative staff are also still determining how many outdoor classrooms there will be and on which campuses they will be constructed.

The Board also approved a motion to accept a price quote for Workman’s Compensation Insurance from Mississippi Municipalities Insurance totaling $246,620 for one year starting the first of October 2021. Persick said that if the District’s modifier drops by next year, she plans to ask the Board to move the policy back to a regular carrier.