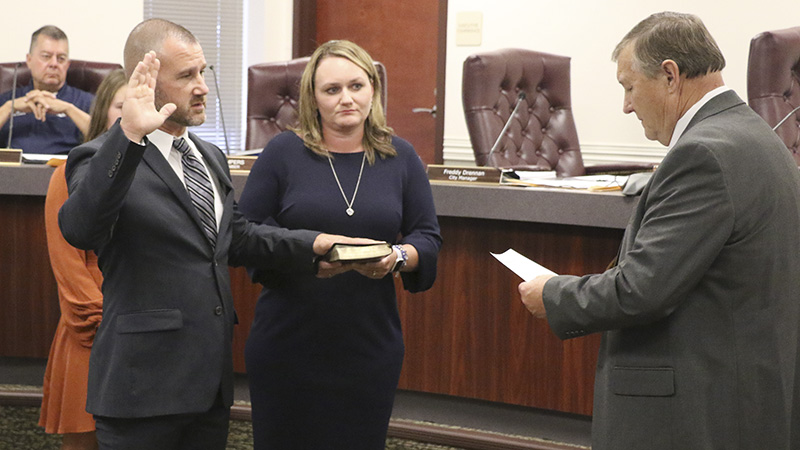 Joe Quave, center left, is sworn in as the city of Picayune’s new police chief during Tuesday’s City Council meeting. He is joined by his wife, Amanda. Swearing him in is Mayor Jim Luke. Photo by Jeremy Pittari

A new police chief was sworn in for the city of Picayune during Tuesday’s City Council meeting.

Joe Quave, who will be leaving his position as a Major with the  Pearl River County Sheriff’s Department to take on the role of Police Chief in the Picayune Police Department, is the city’s new police chief.

Every councilor took a moment after he was sworn in to congratulate him on his new responsibility. City Manager Freddy Drennan said Quave was selected out of a large pool of qualified applicants, but even with his young age, he was chosen as the new police chief due to his knowledge and experience.

Councilor Anna Turnage said she recalls when Quave used to attend Nicholson Elementary when she taught there.

Earlier in the meeting, department heads updated the Council on how city employees fared during the past weekend’s hurricane. She said she knows he will do a good job based on the passion she saw in his eyes Tuesday night after being sworn in.

In relation to the city’s response to Hurricane Ida, Fire Chief Pat Weaver said firefighters delivered 10 sand bags each to 35 homes, for a total of 350 sand bags. Those sandbags were delivered to homes where the residents were unable to secure the bags themselves.

Weaver also said that members of the Pine Grove Volunteer Fire Department Search and Rescue Team, which includes a Picayune firefighter, also responded to a rescue situation where two teenage boys on a boat got trapped on a flooded creek because of flooding that occurred after the storm.

Drennan said that pick up of debris from the storm has been delayed until next week to allow residents ample time to put their storm debris by the road so it can be removed.

Code Enforcement Officer Tom Milar said that his team is currently gathering information about damage in the city should Picayune become eligible for disaster assistance. So far, he knows of only one house that suffered flooding, and that instance entailed about three inches of water in the home.

Picayune Police Assistant Chief James Bolton said lines for gas have waned, but there were instances of verbal altercations ensuing during the height of heavy traffic in the city due to people from neighboring areas needing to get gas. Those altercations were mostly based on people cutting in line.

Bolton said that the presence of 16 state troopers in town helped quell some of those problems.

Public Works Director Eric Morris said his crew gave out about 14,000 sandbags before the storm and ever since they have been busy removing debris from various areas in the city.