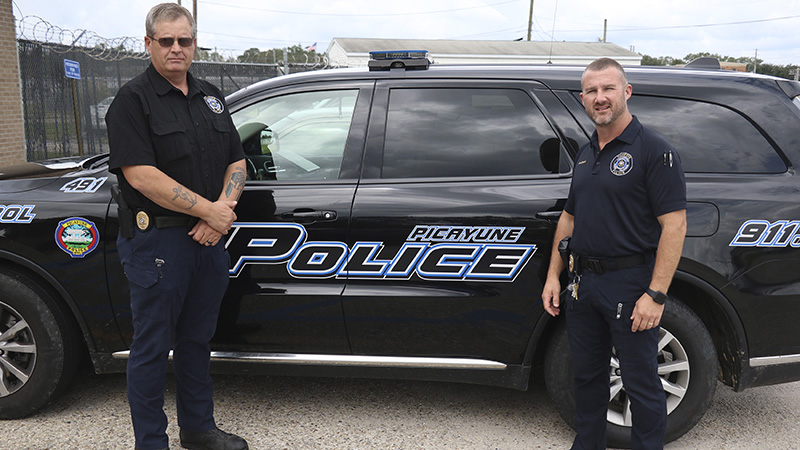 Joe Quave, pictured at far right, has a lot of plans as the new chief of the Picayune Police Department. He is joined by Assistant Chief James Bolton. Photo by Jeremy Pittari

Earlier this month, the newest police chief for the city of Picayune was announced, 38-year-old Joe Quave.

Quave comes from a long line of first responders including law enforcement, firefighters and EMS personnel.

He began his own career in law enforcement about 20 years ago, when he took a job as a corrections officer with the Picayune Police Department six months after graduating high school.

Then, in 2004, he attended and completed the law enforcement academy in Long Beach, making him a sworn police officer. Quave would later go on to become a state certified instructor in 2007 and subsequently took various leadership courses in patrol and leadership. He is also certified to provide firearms training, which he earned in 2015.

“I am very honored to have completed that,” Quave said.

The intensive 10 week course typically has a waiting list. Quave said it can take two to three years for vetted applicants to finally take the course at the FBI academy in Quantico. When he attended the academy, there were 200 attendees from across the U.S. and more than 30 countries.

He has also become an active shooter instructor and started neighborhood watch groups in various communities.

Quave’s last job was as a major with the Pearl River County Sherriff’s Department. He said he plans to use that relationship to ensure the two departments continue working well together. That will include sending some of his officers to train with the Sheriff Department’s SWAT team.

Additionally, Quave will use his extensive training to determine who in the Picayune Police Department will benefit most from similar training so they can learn and bring back that knowledge to the rest of the force. That process will include reviewing the current staff to see who would be a good fit for advancement.

Part of his advancement process will include a fitness test, since a lot of the work police officers perform can be physical. Officers at the Picayune Police Department enjoy access to a private gym located next to the Criminal Justice Center.

During the swearing in ceremony held on Sept. 7, Quave took note of the overwhelming support he received from the law enforcement community and general public. In addition to the Council chambers being filled to capacity, several of his friends and family took a moment to pray for his success after the ceremony.

Some of the plans Quave has for the department include establishing a dedicated community police officer who can assist the public with minor situations, such as a locked vehicle containing a child or pet, funeral processions and helping stranded motorists. That officer would also act as a liaison for neighborhood watches, or work collisions that occur on private property.

The Youth Explorer program was a good way for young people to get a first hand look at the job of a law enforcement officer. While the program is not considered a recruitment tool,  it does provide the youth with an introduction to the field and could entice some of those young people to choose a career  in law enforcement so he also plans to reinstate it.

Any and all free training he can send his officers to will be utilized. Currently two officers are attending crisis intervention training, which can help people who may be dealing with mental illness. Part of that training involves identifying the various types of mental illness, and being able to find avenues for those people to find help before something serious happens. Officers are also being trained to be a trainer concerning active shooter response, which means they will be able to train other officers.

Quave said he is thankful that the City Council has made the decision to invest in the department with a recent millage increase, which will help fund construction of a new police station along with providing officers with a raise to ensure their pay is competitive.

“That is exciting to know that is coming,” Quave said.