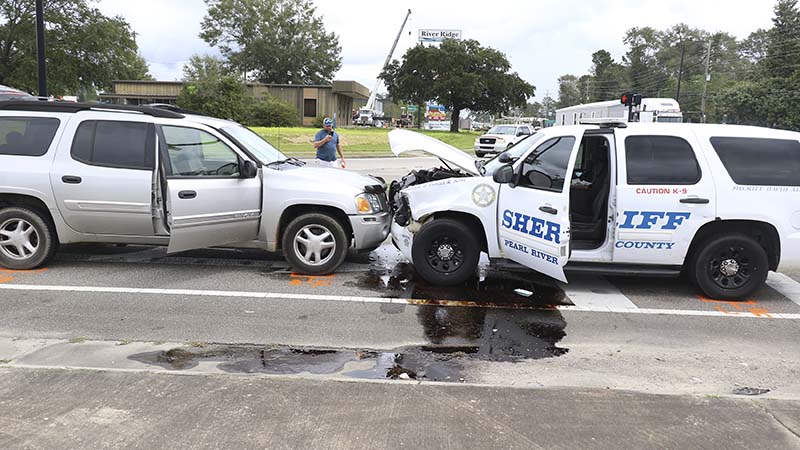 A three vehicle collision occurred Tuesday involving a Sheriff’s Department deputy, a black Cadillac and this GMC Envoy. While damage to the Envoy was minimal, the other two vehicles sustained major damage. No major injuries were reported, but the deputy’s vehicle is totaled. Photo by Jeremy Pittari

A two vehicle collision in Picayune Tuesday afternoon involved a deputy on routine patrol and a Cadillac.

According to eye witness Brian Vellier, the deputy was headed west on Sycamore Road approaching the intersection of Highland Parkway when a black Cadillac pulled into his path, causing the patrol vehicle to strike the black sedan, and careen off of Sycamore Road before slightly impacting a GMC Envoy waiting at the red light.  Vellier and another person were in the Envoy at the time of the collision.

Damage to the patrol vehicle, a GMC Tahoe, and the Cadillac appeared to be severe, while damage to the Envoy was minimal.

Sheriff David Allison said the deputy had the green light and was traveling normal speeds since he was not heading to a call. However, as the deputy approached the intersection, the driver of the Cadillac pulled out in front of the deputy.

The driver of the Cadillac was escorted to an ambulance under his own footing to be treated for complaints of pain, Allison said.

The deputy was also seen by medical personnel at Highland Community Hospital, but no major injuries were reported.