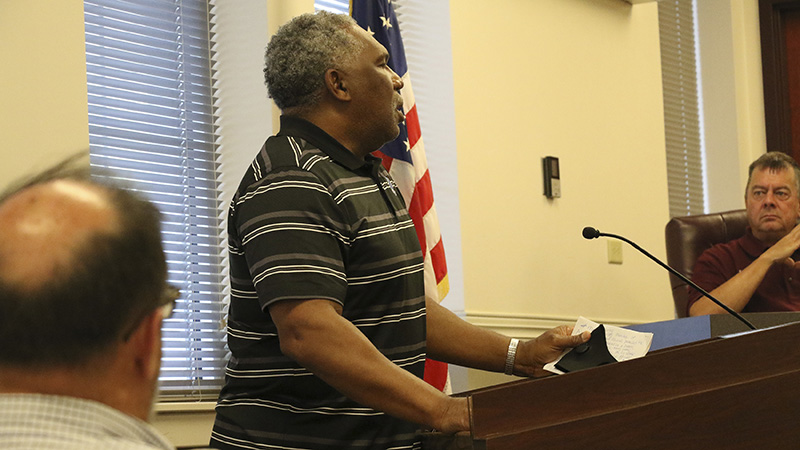 Public Works Director Eric Morris said the contractors are about three fourths of the way through the city collecting piles of construction debris left by the roadside.

Crews are also focusing on west and est sides of the city as they collect vegetative debris.

Near the conclusion of the meeting, Councilor Larry Breland asked the city’s government to consider extending the debris pickup to allow all residents ample time to get it by the roadside.  He said 10 days does not seem like enough time and not extending that effort may mean public works employees will be left picking up storm debris six months from now. No motion was made concerning Breland’s request.

In other business, Rev. Brian Dees addressed the Council to alert them that the first African American to serve in the Marines was a resident of Picayune. The man, D.K. Cooley, recently passed away at the age of 95. Dees said that he nor any of the congregation at Pleasant Valley Baptist Church were aware that Cooley was a member of the Marines, nor that he had received the Congressional Gold Medal for his distinguished service.

Dees asked the Council to consider recognizing Cooley in some form at a subsequent meeting.

He also addressed the Council about one member of the Picayune Fire Department. Dees said that the firefighter took the time to stop at his home when he noticed the American flag outside  Dees’ home had fallen off the pole. Instead of ignoring it, the firefighter and his son took the time to fold the flag and give it back to Dees. During the subsequent conversation, Dees said he learned that the firefighter only makes $11 an hour, even after being a full time member of the department since 2006. Dees pleaded with the Council to consider giving the city’s firefighters a raise, just as the Council had done recently for the city’s police officers.

No action was taken on the raise, but Mayor Jim Luke asked the Council to consider drafting resolutions to recognize Cooley and Jerry Fleming with the Pearl River County Sheriff’s Department, whose remains were escorted back to the city Tuesday morning by a plethora of regional law enforcement personnel.