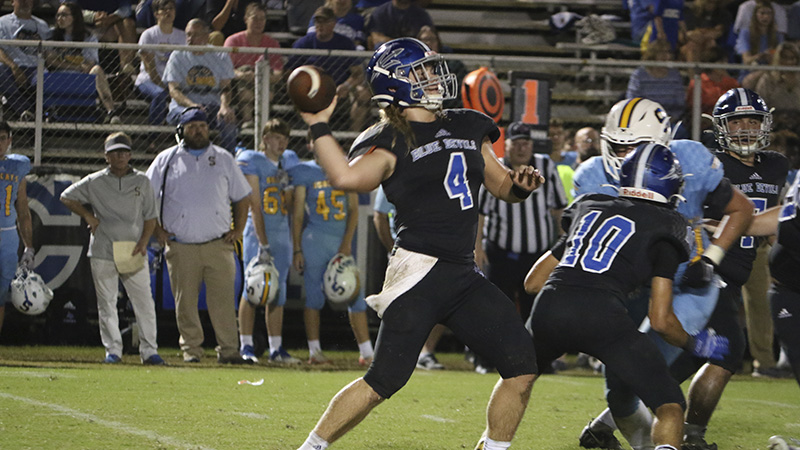 The Blue Devils offense was unable to capitalize on some key opportunities, but the defense was strong enough to keep the game close Friday night against the Bobcats.

“There’s a lot of fight in this team, we’re a good football team. I ain’t worried a bit,” Owen said.

The Blue Devils started out strong, reaching the end zone on the team’s first possession. Through only six plays covering more than 65 yards, Dalton Lee ran a keeper in from the 31 yard line, but a penalty on the Devils brought the play back to the 34 yard line with 8:09 still on the clock in the first quarter.

Through eight more plays PRC was able to get close to the end zone, allowing Lee to repeat his previous scoring play, this time from the 1 yard line.

With 3:54 left in the first, Tyler Diebold put the ball between the uprights for the extra point, giving the Blue Devils an early 7-0 lead.

That momentum gained steam when the Blue Devils recovered a fumble that gave PRC possession well into the second quarter, but the team could not capitalize on that possession and a failed attempt to punt the ball away from the 17 yard line only gave the Bobcats prime position on the field at the 9 yard line.

The Blue Devils got close to taking the lead with less than a couple minutes left before the break, but a fumble by the Blue Devils at the Bobcat’s 36 yard line gave the visiting team the ball. Four plays later, Sumrall covered the distance across the field to find the end zone and ended with a 30 yard pass from John Ford to Tyler Daniels and Smith’s PAT gave the Bobcats a 14-7 lead with only 46 seconds left before halftime.

Early in the third, the lead was widened through four plays covering more than 65 yards that ended with a successful Ford to Daniels pass with 10:50 on the clock. Smith’s PAT put the score at 21-7.

Deeper into the third, the Bobcats gained possession of the ball again. Seven plays later that culminated in a nearly 70 yard drive, the score was put to 28-7 when Ford completed another pass, this time to Cade Dedeaux who ran it the rest of the way in. With 2:59 left in the third, the score was 28-7 with Smith’s PAT.

In  the fourth quarter, PRC had an opportunity to put more points on the board when Destin Coleman ran the ball from the four yard line on second and goal. A fumble of the ball at the goal line put the Bobcats back in control, for a short time.

The defense reclaimed possession of the ball through a three and out, and in three plays reached the end zone when Dalton Lee completed a pass to Stephen Johnson, who toted the ball the rest of the way for a touchdown. With 7:44 left in the game, Diebold’s PAT ate away at Sumrall’s lead, putting the score at 28-14.

The Devils defense stepped up again, and allowed PRC to regain possession of the ball and score again when at second and goal, Lee ran the ball in from the four yard line.

The defense came out strong again and got the ball back for PRC, but a long pass by Lee from the 41 was intercepted by the Bobcats, who ran out the clock to end the game.

“We got to do a lot of things in those tight and critical moments, we didn’t quite have the trust and belief in each other that we need to have to finish those drives. I was proud of the way they fought back. They fought their guts out, I’m proud of them,” Owen said.