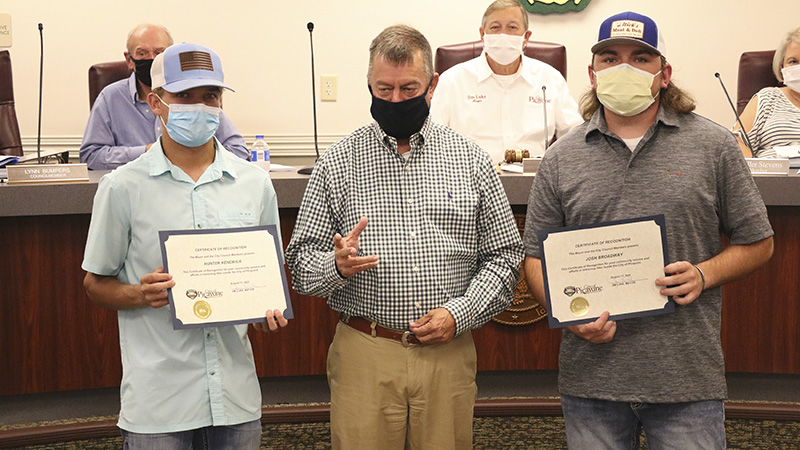 Councilor Frank Ford, center, describes the actions of Hunter Kendrick, left, and Josh Broadway, during Tuesday’s City Council meeting. The teens were recognized for taking the initiative to clean litter from Goodyear Boulevard earlier this month. Photo by Jeremy Pittari

Two local teens were recognized by Picayune’s City Council for their part in cleaning litter from the streets.

Hunter Kendrick and Josh Broadway were on Goodyear Boulevard earlier this month when they noticed the large amount of trash along the busy road.

Councilor Frank Ford asked the two to attend Tuesday’s Council meeting so he could formally recognize them for what they did next.

After noticing the trash, the two young men took it upon themselves to purchase brooms and other litter control devices and pick up the litter.

“It’s folks like this that comprise the fabric of Picayune,” Ford said. “It makes me proud.”

After the recognition, other matters were addressed by the Council.

Grant Administrator Christy Goss asked the Council to accept a grant from the Mississippi Office of Highway Safety totaling $49,776 to be used in the enforcement of drinking and driving laws. She said the grant has been used previously to pay the salary of one DUI officer, but changes to the program now mean the city can use that money to cover overtime for officers who enforce those laws.

The Council also approved a motion to advertise for bids for the installation of automated monitoring equipment in relation to the injection of chlorine and fluoride in the city’s water system.

Public Works Director Eric Morris said the equipment will not necessarily be fully automated, but will allow his staff to not have to come to work on holidays, thereby saving the city overtime expenses.

A motion was also approved to place a recently donated stage under the oak tree located in the north edge of a parking lot at Picayune Drug. Morris said the octagonal stage will be placed on green space in that area. The tree will provide shade while wooden decking and landscaping will make the stage an ideal place for events to be held there.

During discussion of engineering services for the improvements proposed at Friendship Park, Brooks Wallace said the plan is to establish phases to replace Kids Kingdom, install turf on baseball and softball fields and improve parking and drainage at the facility.

So far, the plan is to begin work on the playground first, with turf installation to follow and the drainage and parking issues to be addressed last.

The project will be funded mostly by a $1.9 million grant in BP funding along with a match from the city. The plan is to have the playground completed first. Wallace said the build time for the playground will be about five to six months after the city makes the final approval.

A Jail and Bail is planned to help offset the match the city will be required to provide to get those grant funds. City Manager Freddy Drennan said he anticipates that fundraiser will bring in close to $30,000. Additionally, Economic Development Director Lindsay Ward is said to be working with the Pearl River County Board of Supervisors to form a memorandum of understanding, hopefully resulting in even more money be raised.

At the end of the meeting, Mayor Jim Luke said the public is invited to a prayer event planned at Crosby Commons on Aug. 25 at 7 p.m. led by Allen Hickman.