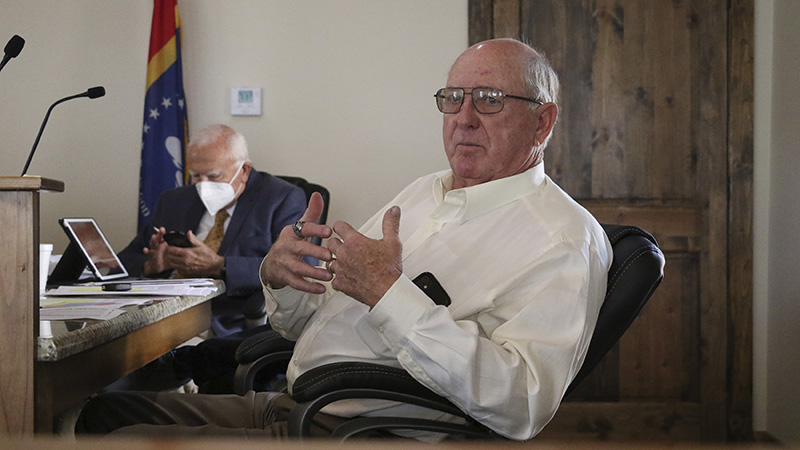 District III Supervisor Hudson Holliday said that the current politicizing of mask use in this country has caused people to put their freedoms before their safety. Photo by Jeremy Pittari

Rising COVID-19 cases within Pearl River County caused the Board of Supervisors to consider putting mask mandates in place within county offices.

Department heads in various county offices reported that they have several county employees who can’t work due to cases of the virus.

Chancery Clerk Melinda Bowman and Circuit Court Clerk Nance Stokes asked the Board to consider putting a mask mandate in place to help protect the public and their staff.

Bowman said the current layout of their office results in customers leaning over the counter, putting them in close proximity with her staff. She suggested construction of a transparent barrier to help address the problem.

Stokes said her staff is asking people who come in to the county courthouse to apply for marriage licenses or to conduct other business to wear masks. Those licenses are also being acquired by appointment only.

When the public is asked to wear a mask, Stokes said there is usually not an issue. Due to the increase in cases, all court trials have been cancelled for the time being and any other cases that can be done virtually are being conducted in that manner.

Stokes said that an election commissioner in Jones County passed away from the virus, and Sheriff David Allison said that two sheriffs in the state also passed away due to COVID related health issues.

In the county jail, Allison said two female inmates tested positive, forcing corrections officers to isolate the inmates from the rest of the jail population. He now expects to see more cases within the jail. No staff of the department have reported a positive case at this time.

Due to the rise in cases, Stokes and Bowman asked the Board if they planned to implement a mask mandate.

Stokes said that if several of her staff get sick, then the whole office will need to close.

She said her goal is to keep her office open and running, and she will not turn anyone away for not wearing a mask, but will move that person’s business to an area with room for social distancing, such as outdoors.

Board President Sandy Kane Smith said since the state has not issued a mandate, he did not feel the Board should implement one.

District III Supervisor Hudson Holliday said he is not sure whether the masks work or not, but the current politicizing of mask use has caused people to consider their freedoms over their personal protection.

After some discussion, the Board approved a motion to allow each department head to decide if masks will need to be worn by staff and members of the public who visit their offices.

With an election set for November, Stokes said she knows there will be members of the public who will need to vote absentee. She said she will not turn a single voter away who is not wearing a mask.