Supervisors recognize Hornet for achievements on the football field 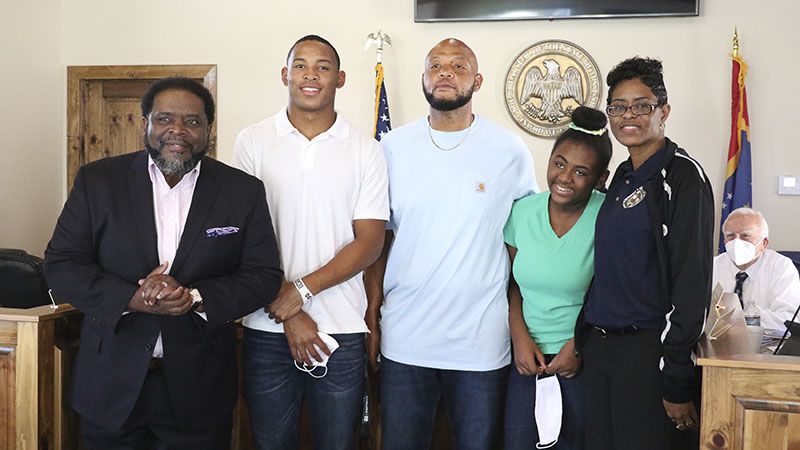 From left are District I Supervisor Donald Hart, Poplarville High School varsity football player Khalid Moore, his father Luchions More, his sister Kiersten Moore and his mother Kimberly Moore. Khalid Moore was recognized by the Pearl River County Board of Supervisors for his achievements on the football field. Photo by Jeremy Pittari

Bus turnarounds maintained by the Pearl River County Board of Supervisors appear to be predominately stops for children attending the Poplarville School District.

During Monday’s meeting, Board President Sandy Kane Smith said he has noticed that most of the requests for bus turnarounds come from that school district.

County Administrator Adrain Lumpkin said that is mostly due to the fact the Poplarville School District covers more of Pearl River County than the other two school districts.

Still, Smith said he suspects that half of the requests for bus turnarounds by the Poplarville School District may not need to be on the list.

District III Supervisor Hudson Holliday said the drives down long driveways leads to long bus rides for many students, some of which have to catch the bus at 6:30 every morning.

In relation to the long list submitted by the Poplarville School District, Holliday suggested asking the district’s transportation director to speak with the Board and possibly look at the locations.

A motion was approved to table acceptance of the bus turnarounds until a later date.

Also during the meeting, District I Supervisor Donald Hart asked a Poplarville student to attend so he could be recognized for his achievements. Khalid Moore was selected as the Clarion Ledger’s Dandy Dozen for the previous school year for his performance on the football field for the Poplarville Hornets. Due to his performances, Moore has signed with Mississippi State to play football after his graduation from Poplarville High School later this school year.

The Board then approved a motion to draft a resolution to officially recognize him for his achievements.

In other business, the Board approved a motion to accept a 28.7 acre piece of property near the Picayune Municipal Airport, which was previously owned by Partners for Pearl River County.

With the reported number of rising cases of COVID-19 in Mississippi, Circuit Clerk Nance Stokes asked the Board if any measures would be taken to protect the public and staff, especially sanitizing county offices where there is heavy traffic. Smith said the process of fogging offices will begin again.