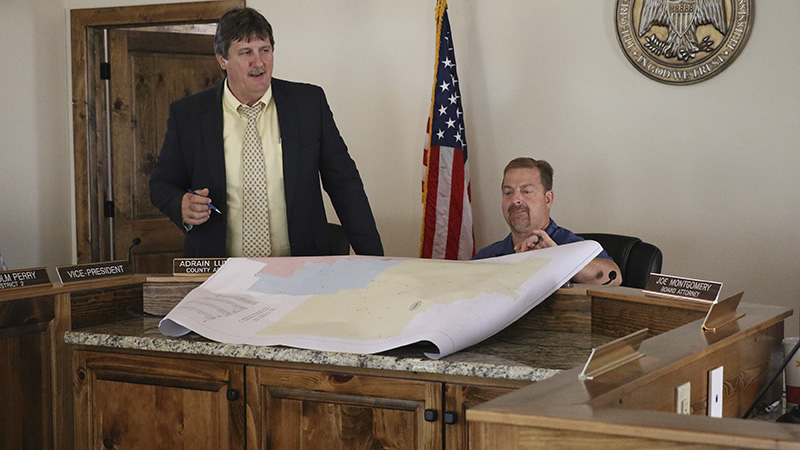 County Administrator Adrain Lumpkin, at left, rolls out a map showing the location of nearly 80 school bus turnarounds the Board approved on Wednesday. Photo by Jeremy Pittari

Dozens of bus turnarounds within the three school districts were approved by the Pearl River County Board of Supervisors.

One of the three school districts, Poplarville School District, covers the most area in the county, and is said to be the third largest school district in the state in terms of square mileage.

Lumpkin said that last year, the Board was asked to approve 128 bus turnarounds, of  which more than 80 were in the Poplarville School District.

In other business, the Board approved a motion for the Pearl River County Sheriff’s Department to provide deputies for security at Poplarville School District athletic events at a rate of $30 an hour. The county will pay the deputies, and the school district will reimburse the county, Lumpkin said.

A quote to have the old Mississippi State Extension Service building in Poplarville torn down was also approved by the Board. That building was damaged by a fire back in April of this year.

Lumpkin said the lowest and best quote was provided by Sam Gentry Dozier at $35,000. Any concrete reclaimed in the demolition will be repurposed as rip rap.

The local office of the Extension Service is currently operating out of the old courthouse on Julia Street in Poplarville.