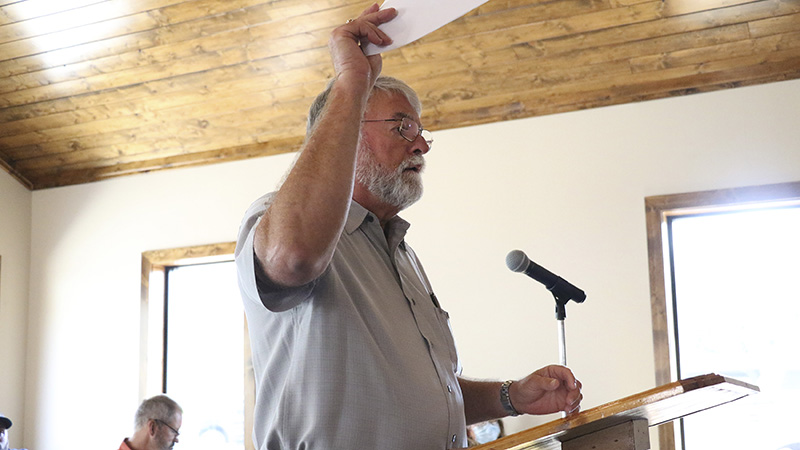 Sheriff David Allison asked for an increase to his budget so he can offer competitive pay to avoid the number of employees who leave for higher paying jobs. Photo by Jeremy Pittari

Low pay, upkeep of the jail and the rising cost of materials led Pearl River County Sheriff David Allison to request about $500,000 in additional funding from the Board of Supervisors during a budget workshop held Wednesday.

Allison said he did some research into how much deputies and corrections officers in other counties are being paid, and found that his staff is at or near the bottom.

Corrections officers in the Pearl River County jail start out making $13.70 an hour, where as a person in the same position in Lamar County starts out making $16.40 an hour, he said. When compared to other counties in the area, including Harrison ($15.29), Jackson ($15.01), Forrest ($15) and Hancock ($14.63), the low pay is a factor in his corrections staff leaving to take jobs at other agencies, Allison said. In an attempt to keep some of his staff, he recently gave those corrections officers a raise. Prior to that raise, corrections officers made $12.50 an hour at the local jail.

As for patrol deputies, they start out making $16.70 in Pearl River County, which is near the lowest in the group of neighboring counties.

For comparison, deputies at Larmar County will soon make $19.55. Only Hancock and Stone Counties pay less than Pearl River County, at $16.20 and $15 respectively. Allison said he called the Hancock County Sheriff, who said he plans to increase his deputies’ pay to $17 an hour.

Allison asked the Board if he could have enough funding to give his deputies a raise to $17.53, putting his agency in the middle of the group in terms of pay scale.

The sheriff said he would like to give all of his employees a five percent raise, equating to about $114,000 in additional expenses on the administration side and about $200,000 on the jail side of his budget. The increase on the jail budget includes the increase in other expenses as well.

In all, he was requesting $550,000 in additional revenue for every aspect of his department.

Other expenses that have increased include ammunition for training, office supplies, vehicle maintenance, insurance policies, and a number of other items.

To help offset the increase, Allison said he is trying to get more federal inmates at the jail, which will bring in $40 per day per inmate for about 50 federal inmates.

When asked how much the county pays to house one inmate, Allison said it costs the county about $30 per day to house and feed one inmate, depending on the population number.

No decision was made on Allison’s request during Wednesday’s meeting.