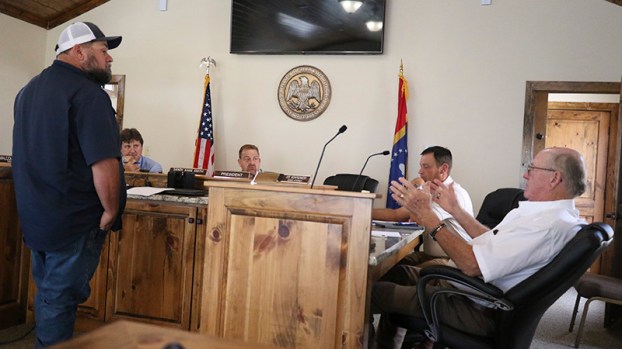 At left, Road Department Manager Charlie Scheilder speaks with members of the Pearl River County Board of Supervisors about a piece of equipment used to mill up old asphalt to make way for new asphalt. Photo by Jeremy Pittari

A 2.55 mill increase is being proposed by the county administrator to pay for a road bond that is currently being used to update the local infrastructure.

During Tuesday’s meeting of the Pearl River County Board of Supervisors, County Administrator Adrain Lumpkin advised the Board that he is proposing the increase. It’s a matter that has been discussed during previous meeting. The anticipated increase will be used to retire a bond that will be used to repave roads in the county.

If approved by the Board of Supervisors next month, the increase would bring the county’s total millage from 54.82 to 57.37. Of that total, 37.05 mills goes to the county’s general fund, 2 mills is used for reappraisals, 1 mill goes to a trust, 2.36 mills funds maintenance work at Pearl River Community College, 2.41 mills goes to PRCC improvement projects, 5.5. mills is set aside for roads, 4.5 mills is used to maintain and build bridges and culverts and the 2.55 mills stated previously would be used to retire the road bond.

Tax payers also pay ad valorem tax to their respective school district. According to information provided at the meeting, Pearl River County School District’s millage will decease from 67.29 to 64.25 mills in the coming fiscal year, while Poplarville’s will stay the same at 58 mills.

Each volunteer fire department in the county also receives 4 mills in funding.

The proposed budget also includes an increase to the Sheriff’s Department budget by a total of $225,000 to cover pay increases in all positions within that agency.

Sherriff David Allison said during a previous meeting that he would like to increase his budget by $500,000 to cover the increase in pay and other expenses he foresees going up, however his budget was tentatively increased by $225,000.

Allison said his plan is to use that additional funding to increase the starting rate of correction officers from $13.70 to $15 and deputies from $16.70 to about $17.70 an hour.

As another wave of COVID-19 rolls the state, and subsequent hardships are expected to strike local businesses as a result,... read more