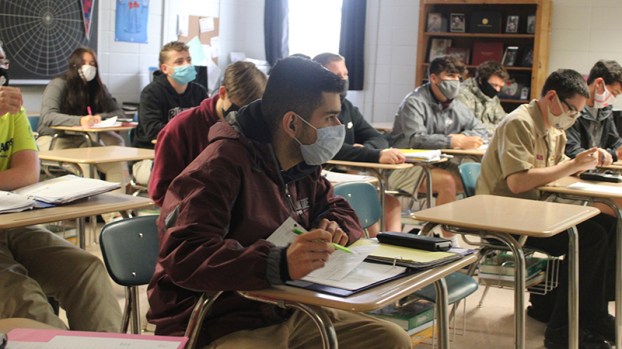 Juniors and seniors listen to a lecture in their Algebra II class at Picayune Memorial High School Wednesday. The state released the ACT test scores for districts' current senior classes. The current juniors just took the test in February. Photo by Cathy Cook

The quarantine of a total of four cohorts within the Pearl River County School District forced the Board of Trustees to hold a special call meeting Monday evening to decide if masks should be mandated, and whether the district should close schools.

Superintendent Alan Lumpkin said that as of Monday, 10 employees and 45 students tested positive for COVID-19, leading to the quarantine of a total of 33 employees and 284 students district wide. Lumpkin said most of the cases occurred at the middle and high school campuses. Those cases resulted in two cohorts at each of those campuses being identified and quarantined, and a third was possible at one of those locations.

While the decision to close schools if three cohorts were found to be in a single campus was not ultimately made, the Board instead decided to continue to quarantine cohorts and require mask use for all students and staff in the district for at least the next two weeks.

Masks will not be required during that two week time frame while the teachers and students are outside.

The meeting was held after Lumpkin asked the Board to hold the special call meeting on Monday due to the statistics quoted earlier.

Lumpkin said there was a possibility a third cohort would need to be quarantined by Tuesday, but that announcement had not been confirmed yet.

He was concerned because the Centers for Disease Control’s guidelines suggest a campus with three or more cohort quarantines close to in person learning, so Lumpkin asked the Board to consider three options concerning providing instruction to students if three cohorts were indeed identified at a single campus.

One option involved closing the district entirely and provide virtual learning to all students for a 14 day period. Lumpkin said that would be a last case scenario.

A second was to just close the schools that have three or more cohort outbreaks and provide 14 days of virtual learning.

A third option was described as being the most difficult for staff to put into motion, but would enable students in affected schools to continue some form of in person learning. That option involved a hybrid of virtual and in person learning, where students would be broken up into two groups dependent on last name. Each group would then attend classes in person for two days and virtually for two days, with the odd day being used for lab time or testing. The cons in that option included the potential for uneven class sizes and the short notice for teachers to put a virtual learning program in place while still teaching children in person.

The Board was also asked to reconsider the mask use policy outlined in the district’s reopening plan.

During discussion of the mask policy, Board members seemed divided on the issue of whether masks should be required. Board member Jerry Frazier, who said he recovered from a case of COVID over the past year or so, said mask use was one of the tools that helped keep the schools open last year.

Board member Mark Herring asked how many people were using masks under the previous reopening plan where mask use was only “recommended.” Lumpkin said that while he didn’t have hard numbers, most people in the schools were not wearing masks. Herring initially suggested leaving that policy in place, but later in the meeting voted with the rest of the Board to put mandated mask use in place district wide for the next two weeks.

After about two hours of discussion, the Board decided to mandate mask use district wide, and continue quarantining just cohorts in an effort to avoid closing a campus even if three cohorts were identified in a single campus. The decision will be revisited again on Aug. 25, when the Board meets for the annual Board workshop.