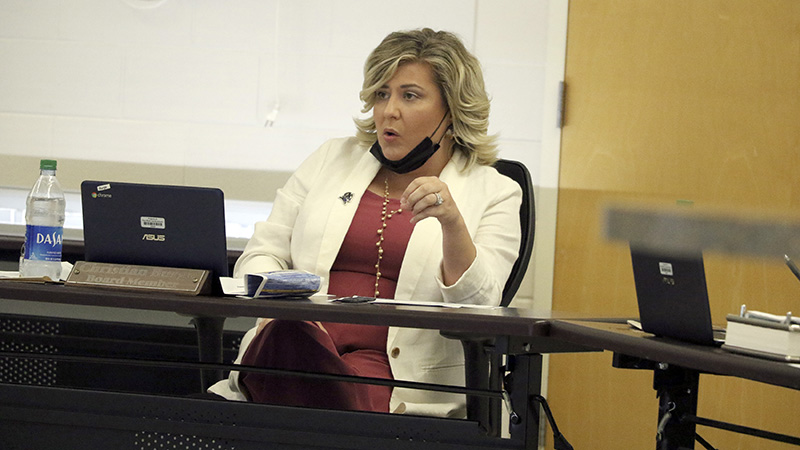 Board member Christian Burge makes a motion to close all schools in the district for three weeks. In the end, the Board unanimously approved a motion to close the schools for two weeks. Photo by Jeremy Pittari

Groups of parents with differing opinions on masks mandates and the way the COVID-19 pandemic is affecting their children gathered at the Carriere campus cafeteria of the Pearl River County School District Thursday.

All of those community members showed concern for their children and if the school district would be closed for a number of weeks.

Nine parents signed up to speak to the Board and convince them one way or another.

Aaron Head kicked off the public comments by saying that viruses are a part of life and while it’s unfortunate they exist, closing the schools will only show the students that it’s better to cower than learn to lead.

Rebecca Knox, a parent of a third grader in the district, said she is aware that the medical facilities are at capacity dealing with COVID patients and any number of other medical conditions. While she and her husband will be forced to take time off from work to care for their children if the schools close, she is willing to do so for the safety of the community and her family.

Dr. Jarrod Barry said he has worked in the medical field for the past decade. While he is concerned about the pandemic, he reminded the Board that 95 percent of those who passed away from a COVID infection had prior co-morbidity issues. He asked the Board to consider the mental toll closing schools will have on the children.

Another medical professional, Melissa Copling, also agrees the pandemic is negatively affecting this and every community, but closing the schools will negatively affect a parent’s ability to work.

Christy Pierce spoke out against the mandated use of masks, stating that according to her research they are ineffective in stopping the spread of viruses. She added that mask use on children is even more detrimental because it can have negative physical and emotional effects. She proposed leaving the decision concerning mask use up to the parents.

Ashley Ramsden has five children who attend the Pearl River County School District. One of those children is entering her senior year, and so far the experience has been terrible for her daughter.

Eva Hayden said she was forced to wear a mask while working at a hardware store. At one point she passed out several times and was later diagnosed with a bacterial infection due to prolonged mask use, she said. She said that sending the children home will only cause parents to have to miss work which is a problem since the additional unemployment payments have ceased.

Deanna Bernard spoke in favor of closing the schools and mask use. She reminded everyone in the audience that they are not qualified to speak about medical issues and the vaccine against COVID is safe.

That comment caused a number of audience members to proclaim “Not FDA approved!”

Bernard went on to say she has seen two of her family members die because of COVID, one of which was in their late 50s and left behind three children.

After all of the comments had been heard, the Board heard recent COVID case numbers in the district from Superintendent Alan Lumpkin.

Students are also being affected, with 101 children testing positive for COVID-19, leading to 624 students district wide being quarantined. Total enrollment in the district is more than 3,000 students.

With those statistics in mind, Lumpkin suggested the Board consider suspending in-person learning for at least two weeks, if not three.

After several minutes of discussion and three rounds of motions, the Board ultimately decided to close all schools in the district until Aug. 27, effectively moving all classes to a virtual setting. That motion included an addendum that the relaunch policy for the district will be reevaluated on a regular basis.

The Board also approved a motion to hold a special call meeting on Aug. 25, to reevaluate the relaunch policy.

Since the closure of schools was set to take place on a Monday, leaving some parents concerned about sending their children to school on Friday, it was stated during the meeting that any student absences on Friday would be excused.