Opioid overdose deaths cause for concern 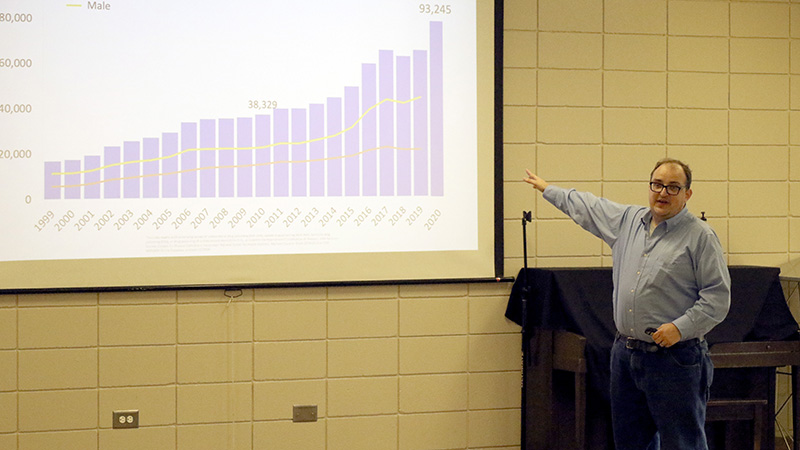 Jordan Hillhouse with the Mississippi Public Health Institute points to a graph that depicts the rise in overdose deaths due to opioids. Photo by Jeremy Pittari

As the opioid crisis continues to take lives in Pearl River County, law enforcement officers gathered at First Baptist Church of Picayune to hear a presentation from a representative of the Mississippi Public Health Institute.

Jordan Hillhouse is with MPHI, and gave the presentation Thursday evening to provide additional information about opioids, how they work and why people become addicted to them.

Hillhouse said this county was chosen as a potential place to provide that information due to the high number of opioid deaths that occur in Pearl River County.

His presentation included a bit of history about opioids and how they affect the human brain.

Opioids have been used by humans as far back as 3000 BCE when the Egyptians used them as a remedy for ailments and as a sleep aid.

One natural opioid, heroin, can be found in three common types, a white powder that is thought to be the purest form, a brown powder that is still quite pure but has some additives, and tar, the most potent kind.

Most opioids are either derived from natural sources, such as heroin, or from synthetic sources created in a lab.

Opioids all work the same way, by triggering the endorphin reward system in the brain. The problem is opioids over exert that reward system and negatively affect the respiratory system, which is what can kill a person taking the drugs.

Part of the reason for the current opioid problem was the over prescribing of the oxycontin and other variants of opioids by doctors who were told by pharmaceutical companies that their products were not addictive in the 80s and 90s. Those false claims led to lawsuits in the 2000’s and the implementation of stricter policies concerning prescribing the drugs and caused Purdue Pharma to release a tamper resistant variant of oxycontin. Hillhouse said those policies now require doctors to keep a record of opioid prescriptions.

A recovery group for those dealing with addiction is offered at First Baptist Church of Picayune every Thursday at 6 p.m. The name of the program is STEPS.