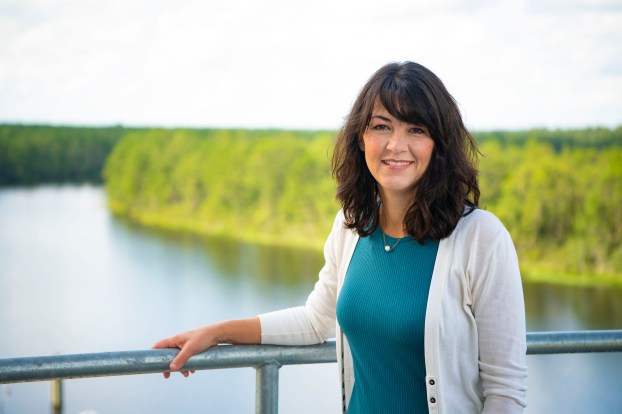 “Not only could I hear it, but I could ‘feel’ it,” Trumbach said, adding it was something she would never forget.

After a teacher encouraged her to study engineering and her grandfather, who worked in the space industry for most of his life, suggested applying for a job at Stennis Space Center, Trumbach was able to hear that rumble again. However, this time she was the one in control.

In 2005, Trumbach, a native and resident of Poplarville, Mississippi, began her career at nearby Stennis as a systems engineer and project manager for High Performance Solutions, a Navy contractor. She maintained facility systems for the Naval Oceanographic Office, the Naval Small Craft Instruction and Technical Training School, and Special Boat Team-22. After Hurricane Katrina, a Category 5 hurricane, destroyed parts of south Mississippi in August 2005, she and her team kept power flowing to critical Navy systems with generators.

Two years later, Trumbach was hired by Pratt and Whitney Rocketdyne, now Aerojet Rocketdyne, as a mechanical test engineer. In this role, she supported the space shuttle main engine testing on the A-2 Test Stand and RS-68 test operations on the B-2 Test Stand.

In 2011, Trumbach became a mechanical test operations engineer with Lockheed Martin at Stennis. During this time, she supported refurbishment of the A-1 Test Stand for J-2X powerpack testing. She subsequently broke barriers to become the first female engineer at Stennis to conduct a J-2X powerpack test. At the time, the J-2X was being developed for use as a next-generation engine.

The powerpack was a system of components installed on the top portion of the J-2X engine, including the gas generator, oxygen and fuel turbopumps, and related ducts and valves. As designed, the powerpack would feed propellants into the thrust chamber system to produce engine thrust. In 2010, Trumbach ran her powerpack test for an incredible 1,261 seconds – one of the longest Stennis hot fires on record.

“I had been a mother for about a year and a half and had been struggling with my work-life balance,” she noted. “Running that test let me prove to myself and others that I could continue to grow in my career and still feel like I was doing my best as a mother. That was a huge milestone in my career.”

In 2012, when hired by NASA as a mechanical test operations engineer, Trumbach carried that confidence with her to support testing of RS-25 engines for use on the new Space Launch System (SLS) rocket that will return humans to the Moon as a part of the Artemis program. By 2018, she had been promoted to the lead mechanical test operations engineer.

When Green Run testing of the SLS core stage began in January 2020, Trumbach had the opportunity to serve as one of the two liquid hydrogen transfer engineers. During Green Run, operators tested all core stage systems to demonstrate they were ready for flight, culminating with a hot fire of the unit’s four RS-25 engines, just as during an actual launch.

The experience allowed Trumbach and her team to attempt things never done previously. Hot fire of the large SLS stage required 537,000 gallons of liquid hydrogen, pushing the facility systems to its limits. Three liquid hydrogen barges were filled to 113% capacity, higher than their typical 111%.

To ensure the core stage was not only full of liquid hydrogen but there was also some left over in case of unforeseen events, two of the three barges had to be completely emptied – not typical operations for the propellant barges. However, Trumbach and her team were able to overcome the challenges and see their hard work pay off in real time.

“Being involved in SLS core stage Green Run testing was an honor and a privilege,” Trumbach said. “Standing in my grandparents’ backyard, I never thought I would get the chance to see or participate in something like that. It was very exciting, but overwhelming when those engines lit up and finally went full duration. Tears came to my eyes.”

Despite exceling in a typically male-dominated field, Trumbach does not let the pressure get to her. In fact, she said that it hardly ever crosses her mind and that she is happy to have a career doing something she loves. Trumbach chooses to embrace the differences between her and her colleagues. She views her team as a family of unique, valued individuals working together through both good and bad to accomplish one major goal – advancement in human space exploration.

“Testing rocket engines can be dangerous and stressful,” Trumbach said. “It is very important for us to be able to trust one another. Being a close-knit group of people helps keep lines of honest communications open. It also makes it fun.”

For the last 16 years, Trumbach has smashed through glass ceilings and made her space dreams a reality. Looking forward, she is excited to see the first successful launch of SLS and subsequent launches that will land the first woman and first person of color on the lunar surface.

“I would tell young girls interested in this field to not place boundaries on themselves because they are female,” Trumbach said. “Work hard and focus on being your best.”

When asked about her biggest accomplishment, however, the Stennis engineer will speak of the growth she found within herself, both spiritually and as a mother, in the last 10 years. With the support of her parents, husband, and NASA, Trumbach has been able to balance work and life, and even homeschool her children. In her spare time, she enjoys walking her pet poodle, participating in outdoor activities with her family, including camping and kayaking, taking care of her plants, or tending to her family’s Nigerian dwarf goats and bantam chickens.