Council hears how the local library system fared during pandemic 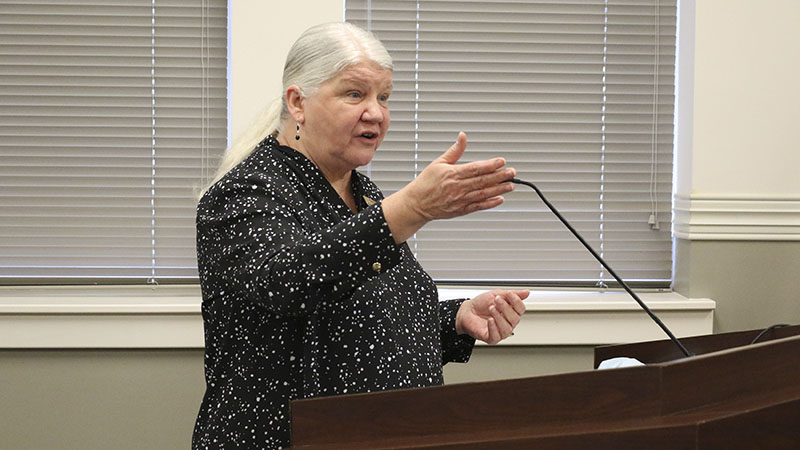 Pearl River County Library System Director Carol Phares addresses Picayune’s City Council to give a presentation on how the library system got through the pandemic, and covered some things she would like to accomplish in the coming year. Photo by Jeremy Pittrai

The importance of a public library was the focus of a presentation made before Picayune’s City Council during this week’s meeting.

Carol Phares, Pearl River County Library System director, said the facility in Picayune was dedicated in February of 1963, and still features a room that depicts what a room in L.O. Crosby’s home would have looked like back then. The facility was donated by Crosby’s wife, which is why it carries the name of Margaret Reed Crosby Memorial Library.

Phares said the system also features a location in Poplarville.

While the location in Poplarville was constructed a bit more recently, Phares said the facility in Picayune has lasted but does need some work. She thanked the city’s employees for their continued efforts to keep the facility maintained.

While Phares did not ask for an increase in funding this year with the end of the fiscal year looming, she did want to outline some of the things her staff have been able to do this past year in spite of a pandemic.

A new database was put in place, the annual book sale was modified so it could be held this year in an effort to make room for more books and for the first time the facility has been able to provide ebooks.

While most staff worked from home during the height of the pandemic, there was one staff member who came to the Picayune location and worked to digitize old copies of the local newspaper.

CARES Act money provided to the system enabled the purchase of web cameras, which enabled patrons to conduct virtual meetings with loved ones and even finish classes online.

Some things Phares wants to implement soon include putting the sound room back into use, live stream Historical Society meetings and create a room for teenagers.

She finished her presentation by asking the Councilors who have not had an opportunity to do so yet to tour the library.

Also during Tuesday’s meeting, Jonathan Hickman with Dungan Engineering presented a DBE plan in relation to the installation of a new AWOS at the Municipal Airport. Hickman said the DBE plan requires the city to seek out businesses that are owned by minorities or women to conduct about seven percent of the work.

Replacement of the airport’s AWOS, which is used to help pilots be aware of weather conditions, will be fully funded by the Federal Aviation Administration, Hickman said.

In other business, Councilor Larry Breland invited the public to a school supply giveaway. He said the supplies are intended for elementary aged children, will be provided by his son Lorenzo Breland and will be available at South Side Elementary from 10 a.m. until noon. Children will need to be accompanied by an adult.

Mayor Jim Luke also provided an update concerning what upgrades will be made at Friendship Park as part of the $2.9 million in BP funding the city was granted. The replacement for Kids Kingdom, which was mostly demolished this year due to rot, will be built in such a way so as to allow children of all ability types to enjoy the playground together.

Also, installation of artificial turf at eight of the baseball and softball fields is planned. Luke said the upgrade in field technology will not only cut down on maintenance costs, but also allow games to take place sooner after a rain event due to increased drainage.

There is also a plan to construct more soccer fields on the west end of Friendship Park, with the intention being to possibly host soccer tournaments.

Restroom facilities are also planned for construction at the T-ball fields to prevent children and parents from having to walk up to 200 yards to get to the existing restrooms at the park, which involves crossing a hazardous intersection.

To ensure acts of vandalism and theft are discouraged, the city intends to install several security cameras as well.

Council hears about efforts going on in all city…