Council hears about efforts going on in all city departments 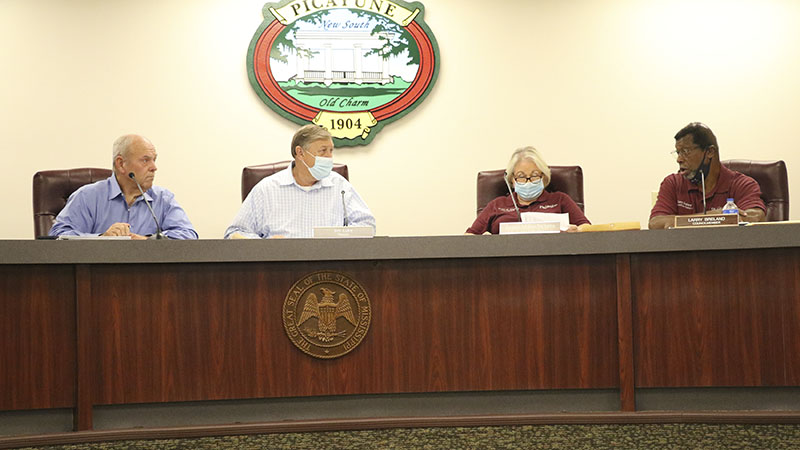 Members of Picayune’s City Council were updated on events going on within each department during Tuesday’s meeting.

City Manager Freddy Drennan said the budget is being compiled at this time and soon public budget hearings will be held.

With cases of COVID-19 reported to be on the rise, Drenann said he planned to meet with State Health Officer Dr. Thomas Dobbs to determine what measures need to be taken in the city based on Dobbs’ guidance so Drennan can present them to the Council at the next meeting. As of Thursday, the decision was made that anyone entering City Hall or any other city office, will be required to wear a face mask, said Grant Administrator Christy Goss.

In the Public Works Department, staffing shortages have caused the staff to adapt to keep up with the work that needs to be done, said Public Works Director Eric Morris. He said he has about four open positions.

He also plans to have concrete slabs poured for a number of the memorial benches that were approved during a previous meeting. Those benches will be installed at Crosby Commons.

Morris also said the citywide water rehabilitation project is nearing completion and completion of the paving project is expected this month.

Fire Chief Pat Weaver said that his department is conducting maintenance on fire hydrants in the city and the administration is looking for a replacement for a firefighter who took a job at the Gulfport Fire Department.

Within the Parks and Recreation Department, employees are playing catch-up with lawn maintenance due to the near daily rain events that have occurred recently.

In relation to the grant funding the city received as part of CARES Act distributions, Drennan said that he has received a number of suggestions from the community as to how the city should spend the $2.6 million grant. While he appreciates the suggestions, he said that the city is restricted in how that money can be used, specifically for water, sewer or storm water projects.

Officers and investigators within the Picayune Police Department have been busy working cases. Assistant Chief James Bolton said that over the past month, officers have made 24 misdemeanor arrests, six felony arrests and investigators are still working leads to identify a suspect involved in the recent bank robbery.

After hearing about staff shortages in the Police Department, Councilor Larry Breland asked if the city loses money when a police officer or firefighter leaves for another job after being certified in their respective field.

Bolton said that the city does lose money, on average between $28,000 and $30,000 on each officer who moves on to another job. That total includes the officer’s duty belt, electronic control device, body camera and the $4,500 fee to send an officer to attend the police academy, to name a few. While some of that equipment is the property of the department and does not leave with the officer, there are many man hours involved in preparing an officer to attend the academy, which includes riding along on patrols with a certified officer. Drennan said that time equates to essentially only one officer being on duty in that patrol vehicle even though there are technically two people in the vehicle.

Drennan added that an officer is not allowed to patrol by themselves until they prove they will do the job properly, and that timeframe is different for each individual.

In an effort to raise money to cover the match for a $2.9 million grant provided by BP funding, Code Enforcement Officer Tom Milar said the city is preparing to hold a jail and bail. The “warrants” are currently being issued and those whose names were chosen are seeking donations.