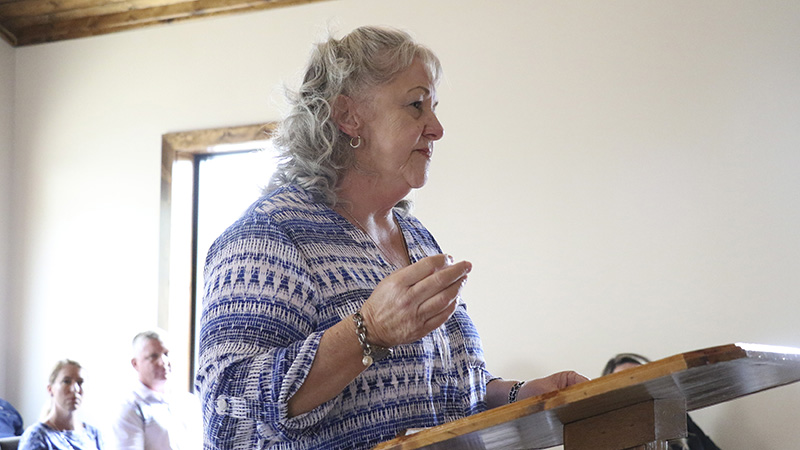 Pearl River County’s Veterans Service Officer Cindy Smith addressed the Pearl River County Board of Supervisors during Tuesday’s meeting, alerting them that she intends to retire in four yeas. Photo by Jeremy Pittari

Certifications for Veterans Service Officers will soon be revised with the passage of Senate Bill 2165.

She brought that up to say that the bill revised the amount of certification a Veterans Service Officer must have, and it took her a lot of work and time to achieve all of her required certifications. Smith said she has been in compliance with the new law since 2008.

Prior to Hurricane Katrina, she was seeing 400 veterans, their spouses or other family members per month, at times seeing veterans who reside in neighboring counties.

Her role is to help veterans apply for and receive as many benefits as they are entitled, such as compensation to pay for their preferred end of life care. No action was necessary by the Board on that matter.

The Board also heard from Les Dungan with Dungan Engineering on the progress being made on the countywide paving project. As of this weekend, six miles of road are ready for overlay. The only holdup is the contractor, who anticipates it being month before crews can begin work on that project.

County road crews are continuing to get more miles ready for paving in the meantime. The goal is to have about 30 miles of county roads paved before the end of the year. Dungan said that 20 percent of that timeline has been exhausted so far, but none of the paving work has taken place yet due to the delay.

The Board also approved a motion to accept the county road bond resolution. Parker Berry with Butler Snow LLP said the $9 million bond will be purchased by Mississippi Development Bank, who will in turn place the bonds with FNB of Picayune and the First in Hattiesburg. The combined interest rate will be 1.48 percent. County Administrator Adrain Lumpkin said that rate is less than the 3 percent he was anticipating.

Freddy Drennan tapped as city manager of city of…