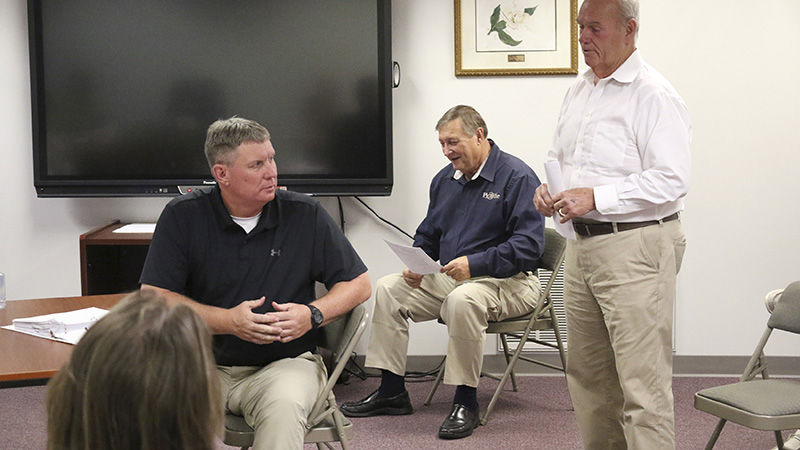 From left, Picayune School District Assistant Superintendent Walt Esslinger and Mayor Jim Luke listens as Picayune’s City Manager Freddy Drennan tells the district’s Board of Trustees that if they ever need anything to give him a call. Photo by Jeremy Pittari

Picayune’s new mayor and city manager visited the Picayune School District’s Board of Trustees this week to express their plan to continue to work well with the school district.

Luke also said that when he transitioned from the position of city manager to mayor, he began looking for his replacement. Prior to that appointment, Drennan was currently serving as the city’s police chief. He was appointed to that position back in October of last year. During the first meeting of the Council, which was held this month, he was appointed city manager.

Luke said that decision was made based on Drennan’s work in his many previous positions. Luke specifically pointed to the economic development that took place in the city of Slidell, La. under Dreannan’s watch.

“When you see Fremeaux, think of Freddy Drennan,” Luke said.

According to previous coverage, Drennan was Slidell’s former mayor and before that served as that city’s police chief, just to name a few of his previous positions.

Drennan told the Board that being able to serve the city as its manager will be an honor and if the Board needs anything they should call.

“If you need me and don’t call, that is your fault,” Dreannan said jovially.

In other business, the Board discussed how certain scenarios pertaining to how fights between students take place and the punishments that occur as a result. Adam Feeley, the district’s athletic director, said that fights are rare, but when they do occur it’s because a student “stepped over the line.”

Superintendent Dean Shaw said that previous discussions about the matter involved ways to deal with scenarios when a students who is being bullied decides to defend their self. Typically when such a fight occurs, both students receive the same punishment.

Board member Josh Robertson said he has received several phone calls about that issue, and feels that such situations only end up taking the student who wants to be in school out of school during the suspension period.

Board member David Mooneyhan suggested the district’s administration provide updates on the matter a couple times a school year to see if the Board needs to address it.

For more on Tuesday’s meeting, see Saturday’s edition of the Item.