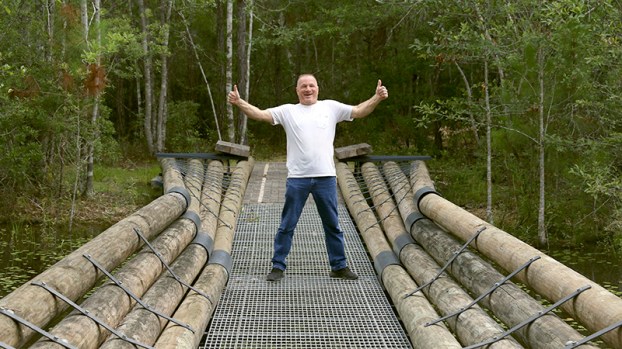 Crosby Arboretum’s man behind the scenes has retired after almost a quarter century of keeping the grounds, facilities and mechanical devices going strong.

Terry Johnson has been a prominent face of the Arboretum. Visitors to the grounds took notice that he always has a smile on his face, and enough energy to get the multitude of the day’s tasks done with ease. He and his late wife Kim moved to the area from Colorado in the mid 90s, taking the job at the Arboretum as just something temporary. But it ended up becoming a career.

Johnson said he started working at the Arboretum when it was still owned by the Gammill family. When the grounds were donated to the Mississippi State University back in July of 1997, Johnson signed a deal to continue his work there. As of his retirement on Wednesday of this past week, he said he put in 24 years and one month, but got credit for 25 years because he rarely used any sick time.

During his tenure at the Arboretum, he personally oversaw or was directly involved in the construction of several of the exhibits. The most recent was the Gum Pond exhibit and the unique bridge that spans the water feature he dug himself. Johnson said he has built out the majority of Dr. Ed Blake’s master plan for the grounds.

Back in April of 2000, he earned his certification to be a burn manager, allowing him to organize and orchestrate controlled burns on the Arboretum’s savannah exhibits. Those burns are necessary to ensure the health of those exhibits, which simulate wild fires that occur in nature and help some of the native plants germinate.

He was also responsible for the upkeep of the Arboretum’s various kiosks, bridges, water features, automobiles, HVAC systems and just about anything else that might need to be maintained.

“I put my sweat and blood in here and loved every minute of it,” Johnson said.

He also teamed up with the local Eagle Scouts, organizing more than 20 projects so scouts could earn that prestigious designation and worked with members of the Navy who regularly came out to donate their time to help around the grounds.

The hardest time during his tenure there was the recovery period right after Hurricane Katrina. Johnson said it took about three months to just get the facility back up and running.

“It’s been interesting to watch the progression of the plants,” Johnson said.

During his retirement, he plans to spend time with his wife Julie, complete the rebuild of his classic Pontiac Firebird and ride his motorcycle. He said he may even get some fishing in.

A Picayune man went on a spree of breaking traffic laws that included the theft of two vehicles and borrowing... read more