Hornets to get new scoreboard 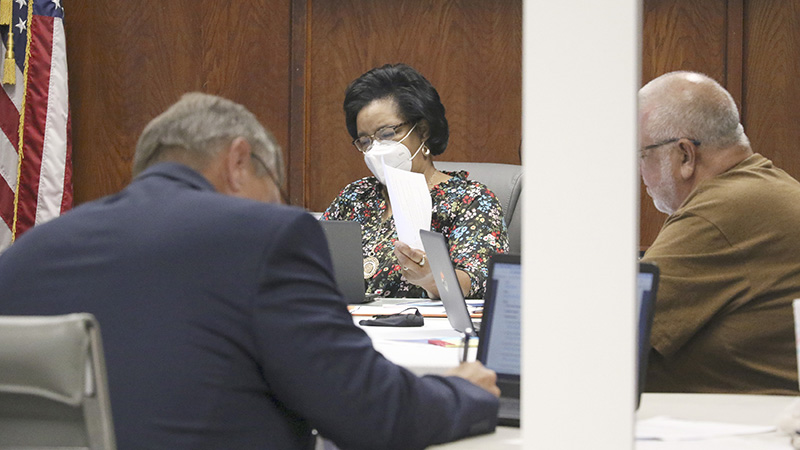 Poplarville School District Board of Trustees President Violene Jordan looks over some paper work during Monday’s meeting. A number of projects were discussed during the meeting. Photo by Jeremy Pittari

Home football and soccer games will be a bit more entertaining for fans of the Poplarville Hornets soon.

During Poplarville School District’s Board of Trustees meeting held Monday, the Board approved a motion to accept a bid from Formetco for an outdoor multi sport LED video scoreboard.

Superintendent Jon Will said the cost of the new equipment will be $174,630. District Athletic Director Jay Beech said the purchase will be covered by the Booster Club and through advertisement opportunities offered to local businesses.

In other business, the Board heard suggestions from Will concerning ways to use federal grant funding and money that will come available when a three mill note is retired soon.

Under the America Rescue Plan, the district will be receiving about $3.8 million in funding. Will said restrictions on the funding state it must be used to mitigate COVID risks, so he suggested the district use that funding to make a number of improvements to several facilities.

Some of those suggestions included upgrading restroom facilities and HVAC systems at several campuses and expanding the office space, improving the parking lot and expanding the playground at the Upper Elementary.

With a three mill note rolling off that was used 10 years ago to add classrooms and other expansions, Will suggested the Board seek another three mill note and use those funds to do other necessary upgrades in the district. Some of those suggested upgrades include renovation of several outdoor athletic facilities, creation of a plaza entrance to the football stadium complete with ticket booths, and additional concession stands and restroom upgrades at the football stadium.

Currently there are no restrooms at the baseball field, so Will suggested adding those to the list as well. Some of the funding could also be used to install turf on the football/soccer field and do some infield work at the baseball and softball fields.

He also suggested building a practice soccer field so the band and soccer team will no longer have conflicts in securing a place to practice.

Will ended his presentation by saying that there is a deadline of Aug. 21, to submit projects for the ARP funding, and if the Board opted to renew the three mill note, the district would have to hire a bond lawyer.

Hospital administrator asks public to get vaccinated due to…