Freddy Drennan tapped as city manager of city of Picayune 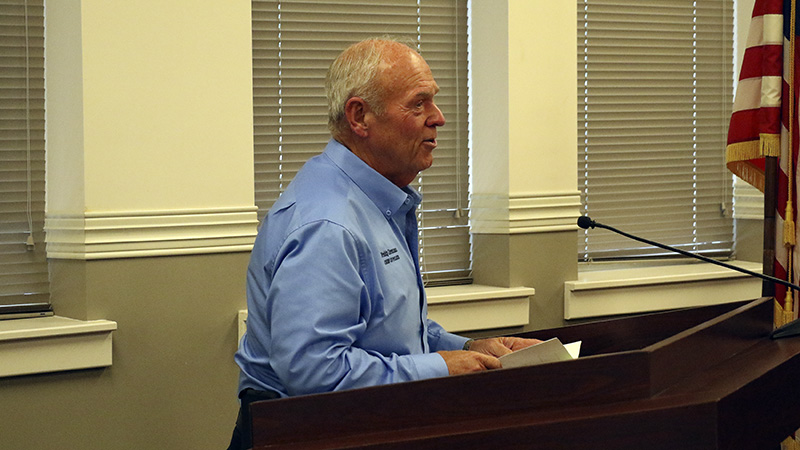 Incoming City Manager Freddy Drenann thanks the City Council of Picayune for entrusting him with the position. A replacement for Drennan, who currently serves as Picayune’s Police Chief, was not named during Tuesday’s meeting. Photo by Jeremy Pittari

Current Picayune Police Chief was appointed city manager during the City Council’s first meeting with the new administration in office.

While many seats remained unchanged, it was the first meeting of this administration for incoming Councilors Frank Ford and Anna Bales Turnage and Jim Luke as mayor. Turnage has served on the Council during a previous administration.

Prior to the appointment of Drennan and other positions within the city, the Council accepted the resignation of Luke as city manager and Ford as a member of the Picayune School District’s Board of Trustees. A replacement for Ford on that Board was not named during Tuesday’s meeting.

Two positions were left unfilled for the time being, those of city judge and city engineer. When nominations were called for those positions, Councilors Jan Stevens and Larry Breland asked that those positions be taken under advisement respectively. Until the matter is revisited, current Municipal Judge Gerald Cruthird and current engineering firm Dungan Engineering will continue in those capacities.

Close to the end of the meeting, two motions were read aloud by Turnage from what appeared to be a written statement. While it is unclear at press time, the motions that were read by Turnage and approved by the rest of the Council appear to put the city clerk under the direct supervision of the city manager.

Under the current form of government, the city clerk reports directly to the City Council. When the Item asked for copies of the wording of those motions Turnage read to clarify the matter, worded respectively as “Consider entry of order(s) by the mayor and City Council regarding the operation of city government.” and “Consider the discussion of and direct the preparation of any ordinance(s) regarding the operation of the city government,” Luke directed the question to the city attorney.

Farmer said he will provide the documentation after the Council held an executive session to discuss litigation matters. That documentation was not received by press time.