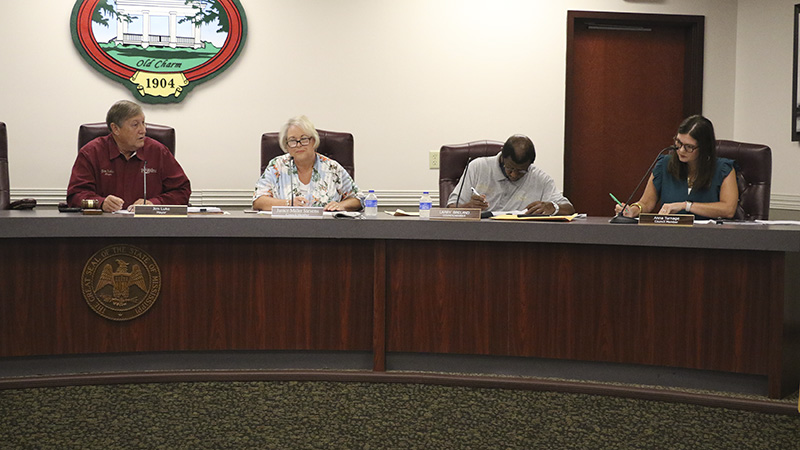 Also, the Item acquired the exact wording read by Councilor Anna Turnage concerning changes to the way the city operates, specifically concerning who the city clerk now reports to.

During Tuesday’s meeting, the Council approved a request to keep Matthew D. Busby on as the city’s public defender. Municipal Court Clerk Lisa Albritton said Busby has been serving in that role since the previous public defender quit back in December and requested to stay on in that capacity.

Additionally, donations from Dr. Norman and Mary Whittaeur valued at $12,000 were accepted. The agenda states the donation is comprised of various items.

Huey P. Stockstill LLC intends to donate materials and labor to pave an alley behind the Post Office. Public Works Director Eric Morris said the donation will cover all expenses for that work.

After accepting a donation from the granddaughter of Marie P. Williams for the placement of a memorial bench at the Eighth Street cemetery, the Council also approved a motion to allow the installation of eight more benches at Crosby Commons.

The cost for each bench will be a bit more than the benches that are there now. Morris said any new benches will be of the same type and material as those currently in the park. The cost to community members for each bench went up from $500 to about $888. Installation of each bench will cost the city about $200 to install the concrete slab, conduct landscaping and purchase the dedication plaque.

Work to replace the aging Airport Weather Observation System at the Municipal Airport may be delayed, but the Council approved a motion Tuesday to complete the final paper work so the funding will be ensured. Jonathan Hickman with Dungan Engineering said the entire cost for the project will be covered by the Federal Aviation Administration. It might be a while before the necessary equipment can be purchased, however. Due to current shortages, Hickman estimates it might be six months before the equipment can be procured. Once the equipment arrives, it should take a month to install.

Also during Tuesday’s meeting, the Council approved a motion that put the city clerk under the direct supervision of the city manager. Prior to that change, the city clerk reported directly to the City Council.

A public records request was submitted after Tuesday’s meeting to get the exact wording of the motion made by Councilor Anna Turnage, after city attorney Nathan Farmer sent an email stating the Item would have to get the information from the city clerk. That wording, as it will be displayed in the minutes, is as follows:

“Motion was made by Council Member Turnage, seconded by Council Member Stevens, that we direct the City Attorney to prepare for consideration at the Recess Meeting of Council and Ordinances regarding the City Clerk, Treasurer, and Deputy Clerk(s) shall be appointed by, removed by and supervised solely by the City Manager.”

Harbor Freight Tools to open in Picayune on July…