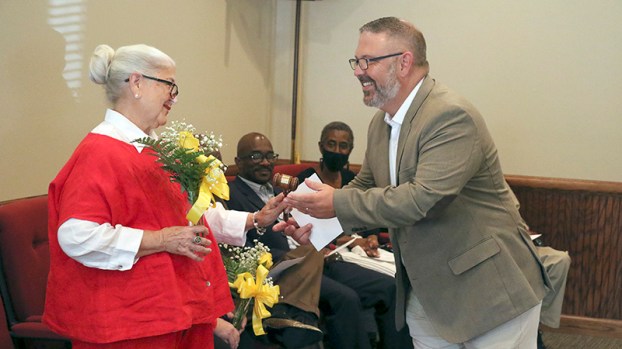 Outgoing Mayor Rossie Creel hands over the gavel at the conclusion of a swearing in ceremony held July 1. Photo by Jeremy Pittari

Board of Aldermen appoint city positions

With a new Board of Aldermen officially taking office in Poplarville as of this month, several positions needed to be appointed or reappointed.

During Tuesday’s meeting, the Board approved the placement of people in several positions.

The reappointments of Fire Chief Jason Banister and Deputy Fire Chief Mark Palmer were taken under advisement. O’Neal said that Wells asked for an in-depth departmental report on the Poplarville Fire Department’s accomplishments and plans for the future.

O’Neal said that Highland Community Hospital Administrator Bryan Maxie spoke to the Board in executive session about possible expansion of the Pearl River County Hospital and Nursing Home.

Since the discussion was held in executive sessions, she said she could not provide details, but did add that no motion was made by the Board after coming back into open session.

In other business, the Board approved a motion to have the city attorney review all ordinances established by the previous administration for the past 90 days, which includes consideration of an ordinance concerning a speed limit on streets where the use of golf carts could be legal on city streets.

A request to erect banners within the city advertising a wrestling event was also approved. Those banners will be displayed until July 18.

A bid to replace the roof on the Cumberland Water Plant control building totaling $4,500 from Blake Breland was approved by the Board during the meeting as well.

Certifications for Veterans Service Officers will soon be revised with the passage of Senate Bill 2165. During Tuesday’s meeting of... read more