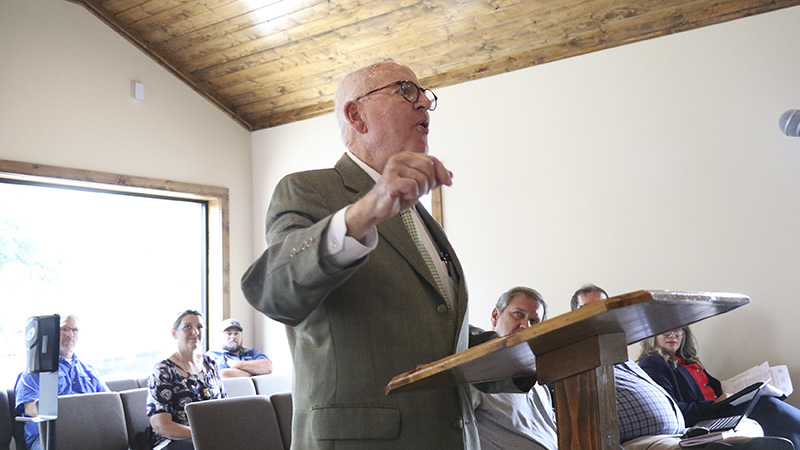 Phase 1 of the county’s paving project is underway, and it includes about 30 miles of roads.

Les Dungan with Dungan Engineering gave the Pearl River County Board of Supervisors an update on that project during Monday’s meeting, saying he expects phase 1 to be complete by the end of this year.

Patching and leveling of some roads began on May 17, with work beginning within District 3 of the county.

Repairs to a bridge on Walkiah Bluff Road are also underway, but the work was pushed back due to a delay in the delivery of pilings from the concrete plant.

Discussions concerning the repair of the weir along the Pearl River near Walkiah Bluff are also continuing. Dungan said the next step involves all governmental agencies, including Mississippi Department of Environmental Quality, Mississippi Department of Wildlife, Fisheries and Parks and the corresponding Louisiana agencies to name a few, deciding on the best course of action. Dungan said it may not be until the next budget year before the project moves forward.

In other business, a proposed project by the Mississippi Department of Transportation to replace a bridge along Highway 43 North over Hogpen Branch near Rock Ranch Road has members of the Board of Supervisors concerned about where traffic will be diverted. If that traffic is diverted to Rock Ranch Road and then to George Wise Road, those areas are not designed to handle large traffic loads.

Some members of the Board said that MDOT needs to consider the cost to the county to repair those roads once the bridge is replaced.

During Monday’s meeting 15th Circuit Court Judge Prentiss Harrell stopped in the meeting to invite members of the Board to attend an upcoming graduation of Intervention Court, formerly known as Drug Court, set for June 25 at Woodlawn Church in Columbia at 10 a.m.

He added that not a single person in the program has “tested hot” in the past three months. Participants in the program have typically been convicted of a drug offense for the first time. Competing the program is a way for those individuals to have that record expunged.